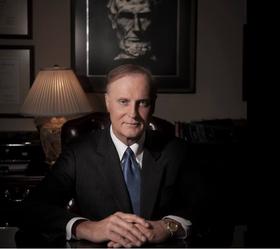 Last week, Florida’s Stand Your Ground law took center stage as people rallied, protested, and marched over the killing of a black unarmed man during a dispute over a handicapped parking space.

The shooter, a white man, was never arrested. That is, until earlier this week, when the Pinellas County State Attorney decided to file charges.

Last week, Sascha Cordner spoke to the main author of Stand Your Ground, who weighed in on the case and the law before the charges were filed. But, first, what led up to this point?

That’s after weeks of him not facing arrest, following the shooting.

McGlockton’s girlfriend illegally parked in a handicap spot, while McGlockton went inside a Clearwater Convenience Store. Drejka then confronted her about parking there without a permit.

Surveillance video shows Drejka firing the shots, after McGlockton came out the store and shoved Drejka to the ground.

At the time, Drejka had claimed self-defense. And, Pinellas County Sheriff Bob Gualtieri said he was just following the law.

“My decision not to arrest is because Florida law creates a situation where someone is immune from arrest if their conduct is arguably within the parameters of Stand Your Ground,” he said, at the time. “This is not a defense to be merely asserted at trial or after commencement of criminal proceedings. This is an immunity from arrest.”

While McGlockton’s family says there now pleased with Drejka’s arrest, Tampa Attorney Michelle Rayner says he should have been arrested then. Rayner is part of the attorney team representing the family.

“It’s so interesting that we have a convenient application of Stand Your Ground,” she said. “Because as I’ve said before when I talk to my clients about Stand Your Ground, it’s down at the county jail. It’s not at home. They’re not eating their fruit loops. They’re not resting. I have to go to jail and talk to them because they’ve been arrested at the scene. Why did this not happen here? And, what color are they? We already know the answer to that.”

Court Records show Drejka had been involved with other incidents like this—two of which involved Drejka displaying a gun. Tallahassee Attorney Ben Crump also represents the McGlockton family.

There have also been bipartisan agreement that Stand Your Ground did not apply in this case. But, there are still some Republicans that say it could.

He says to understand whether it applies, the law first must be understood.

Simmons adds the state of Florida does not impose upon an innocent victim the “artificial obligation of turning and running if he or she can do so.”

“We simply say, do you believe that under all the circumstances being the innocent victim who did not provoke the use of force, the person who did not start this altercation, this problem…did you act reasonably under all the circumstances by reasonably—and that’s objectively reasonably—believe that the use of deadly force was necessary in order to avoid or prevent imminent death or great bodily injury,” he asked.

So, he says Drejka’s case needs to be looked at within those parameters.

“Was Mr. Drejka acting reasonably and within the set of restrictions and criteria that Florida as well as almost every other state imposes on its citizens who are acting in self-defense? And these are the things that law enforcement and the state attorney’s office—I suggest—according to the statute, be looked at,” continued Simmons.

Meanwhile, since McGlockton’s death, there have been repeated calls for a repeal of Stand Your Ground. But, Simmons says taking a look at other states and past court rulings, it is working.

He points to an example of a woman attacked at a shopping center by a man who says he’ll rape and kill her.

“I ask you this: are you going to impose upon her the obligation as an innocent person to be second guessed that she needs to in high heels or whatever else to try and turn and run—rather than use deadly force to protect herself? I think the resounding answer is: we don’t need to be second guessing her, just like the United States Supreme Court in 1920 said,” Simmons concluded.

As for Drejka, his bond is set at $100,000. If he does make bail, a Pinellas County judge has said he’ll have to surrender his guns, wear an ankle monitor, and not leave the county.

Defendant Tries To Sway Justices On ‘Stand Your Ground’ Change

Pointing in part to statements made by lawmakers, attorneys for a woman arrested in a shooting outside a Miami nightclub filed a 40-page brief late Wednesday at the Florida Supreme Court arguing that a 2017 change in the “stand your ground” self-defense law should apply to her case.

Arrest Made In Stand Your Ground Case, Shooter Charged With Manslaughter

There has been an arrest in the Clearwater 'stand your ground' case.

The Pinellas Pasco State Attorney's office is charging Micheal Drejka with manslaughter in the death of Markeis McGlockton.

Florida Democrats Fail In Bid To Repeal 'Stand Your Ground'

Florida Democratic lawmakers have failed to force the Republican-controlled Legislature to repeal the state's contentious "stand your ground law."