Events will be held across the greater Tampa Bay region to commemorate the 20th anniversary of the Sept. 11, 2001 terrorist attacks.

On a day of remembrance, thousands will raise flags and gather across the Tampa Bay area and the country to honor the victims killed in the terrorist attacks of Sept. 11, 2001.

Carlos Moreira is among the organizers of the 20th Year Remembrance of 9/11 at the University of South Florida Sarasota-Manatee campus.

The director of campus engagement for Veteran Success and Alumni Affairs said the event is an opportunity to come together as a community to honor the lives lost that day.

“We just have to do it, we can’t just go without doing an event. Regardless of the weather, we're going to be out there … recognizing those that we lost … [and] how also those events changed the nation.”

The ceremony will start at 8:15 a.m. with the raising of the American flag by the USF Police Department and the Pledge of Allegiance.

Attendees will also hear speeches from Regional Chancellor Karen A. Holbrook as well as retired New York City firefighter Garrett C. Lindgren. A Bradenton native, Lindgren was among the first responders at the World Trade Center that morning.

The speeches will be followed by the singing of the national anthem by Robert E. Willis Elementary School student Adyson Shortridge, 10, and performances by St. Stephen’s Episcopal School children’s choir.

“We just have so much support and involvement from the community … It's the least we could do, especially that it's going to be 20 years since 9/11 took place,” Moreira said.

The event will be free and open to the public. Social distancing guidelines will be enforced while masks will be optional. Moreira said he expects around 100 people to attend the ceremony.

The event will also feature 2,997 flags planted across the campus’ courtyard lawn to memorialize each victim of 9/11. The flags, Moreira said, will be in place until Sept. 13.

With the event being held at a college campus, students who might have not been alive or were too young to remember what happened on 9/11 are expected to be in attendance.

Despite this, Moreira said the anniversary will be an opportunity for them to learn about the events that shaped their lives and the nation.

“It’s just one education of what happened, what took place by having this ceremony and making sure they understand the significance of how this affected America,” Moreira said.

For Moreira, who is also a First Sergeant in the United States Marine Corps Reserve and served in Afghanistan in 2014, the anniversary will be a time to remember the sacrifices made by first responders and how the community came together across the country.

“Never forget the 11th, what took place, the large loss, but at the same time, try to remember what took place on September 12 and [it] was the day that everybody came together as a nation,” Moreira said.

A number of other events will be held around the greater Tampa Bay region to commemorate the 20th anniversary of the Sept. 11 attacks.

Lutz: The Rotary Club of Wesley Chapel and Tampa Premium Outlets are hosting a one-mile memorial run starting at 7:30 a.m. at the outlets (2300 Grand Cypress Dr, Lutz). It will be followed by a ceremony at 8:46 a.m., the time American Airlines Flight 11 crashed into the North Tower of the World Trade Center. Registration for the event, which costs $10 and will be held both in person and virtually, can be found here.

There will be an opening ceremony presented by the Tampa Fire Rescue Honor Guard. Speakers include Tampa Mayor Jane Castor, Fire Chief Barbara Tripp, and keynote speaker Commander, USSOCOM, General Richard D. Clarke. Due to current COVID awareness, this venue will be outdoors and there will be added separation with the guest seating. Mask use is encouraged.

Virtual: Andrea Assaf from Art2Action in Tampa and New York City holds a virtual 9/11 Story Circle, a space for community story sharing and reflection, in partnership with The Carver Community Cultural Center. The circle, which takes place online from 11 a.m. to 1 p.m. is free and open to the public with online registration.

The Polk County Veteran's Council and all Polk County Fire and Law Enforcement agencies will mark the 20th anniversary of 9-11 and also honor all local first responders. The 13 military members who lost their lives during the evacuation efforts in Afghanistan in August will also be remembered. The event starts at 5 p.m. with a Freedom Walk in South Central Park in downtown Winter Haven, followed by an evening luminary service.

Classical WSMR 89.1 and 103.9: Classical WSMR commemorates the 20th anniversary of 9-11 at 7 p.m. with a pair of Masterworks: first, Gabriel Faure’s Requiem and On the Transmigration of Souls by John Adams, which was commissioned by the New York Philharmonic for the first anniversary of the attacks. 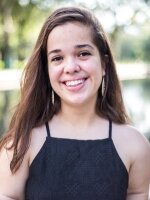 Leda Alvim
Leda Alvim is a WUSF Public Media intern for the 2021 fall semester and editor of The Oracle, the USF Tampa campus student newspaper.
See stories by Leda Alvim