The University of South Florida held the inauguration for USF alumna Rhea Law on Thursday.

The Yuengling Center on the University of South Florida’s Tampa campus was lit in green and gold for Thursday's presidential inauguration of Rhea Law.

Although she was officially confirmed as USF’s president in March 2022, Law’s formal installation was a historical moment, as she is the first university alumna to take the position.

During her address, Law spoke fondly of her time at USF, starting as an 18-year-old student. She was the first in her family to go to college and to help pay for tuition, Law got a job at USF's Division of Sponsored Research.

Law said she initially planned on being a doctor, but after much soul-searching, she decided to pursue a business degree and become a lawyer. Her bachelor's degree took ten years to earn.

Upon graduation from USF, Law said she cashed out [her] retirement savings and enrolled at Stetson University College of Law.

"No one expected me to go to college and certainly not to law school,” Law told the crowd.

She credited geology professor Bill Taft, her first supervisor at USF — who sat on stage during the ceremony and was the only person asked by Law to stand and be recognized — as being a mentor, advocate, and the person who showed her that anything is possible.

Law then asked the audience: “What’s possible for (USF) when we move forward together?”

Presidents and delegates from other universities were in attendance, along with USF faculty, alumni and students.

“From her very first day in office, President Law set out a bold agenda, pledging to continue USF’s momentum in the U.S. News and World Report (rankings), as well as in research, patent creation, and community impact," said Ray Rodrigues, Chancellor of the State University System of Florida.

"She set her sights on USF becoming a top 25 public university in the country. And she has vowed the university will redouble the efforts that led it to land the number 25 spot in the country for total research expenditures.”

Nithin Palyam, USF student government president, cited Law's experience as a highly recognized lawyer, as well as her tenure as the only female chair of USF's Board of Trustees, saying he "realized that she has been a 'girl boss' her entire life."

Others joined in sharing some of the adventurous and daring feats that Law has accomplished, with one common thread throughout the ceremony being Law’s “need for speed.”

Ken Whitten, the pastor of Idlewild Baptist Church which Law and her husband, Wayne Williams, attends, shared Law has flown in an F-16, parachuted with the U.S. Army Golden Knights, and raced cars, motorcycles and motocross bikes.

Bob Ward, the President and CEO of the Florida Council of 100, said that the same “need for speed” would also push USF to what he called "the next level of excellence."

There was one interruption during the ceremony just before the formal installation, as a group of students in the audience stood on their chairs and began chanting, “Increase Black enrollment now.”

The group also held up a large black banner with the message in bold, white letters before being escorted from the building.

In her speech, Law addressed their concerns: “To those who just spoke a few moments ago, I just want to say that we've been working very hard on Black enrollment. And in fact, we have some great news to share, which will be coming soon.”

Throughout her speech, Law talked of the high hopes she has for USF, including strengthening community relationships.

One of her top priorities — and one of her annual goals according to the USF Board of Trustees — is to add an on-campus football stadium in Tampa, something Law said will provide significant value to USF’s athletic programs.

“All the change we've seen thus far is still only the beginning," Law said. "USF is a place of progress. I have no doubt that our next chapter will be our greatest one yet.”

While Law was formally installed as president in March 2022, USF officials pointed out that it’s typical for such inaugurations to be held several months after a new president assumes office.

As a USF press release explained, "This allows time for important university initiatives to be the initial focus, for ceremonial preparations to be made and for invited guests from across the country to make the proper travel arrangements to attend."

To read a transcript of Law's inaugural address, click here. The entire ceremony can be seen below. 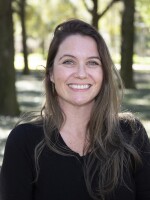