It’s 13 days before the election, and one of the candidates for St. Petersburg Mayor finds himself in front of a class of University of South Florida St. Pete students, explaining what his last six months have been like.

"It has been a far different election that the city has ever seen for mayor, or for that matter, really in some ways, for any other race," said incumbent mayor, Rick Kriseman, who’s in a neck-and-neck race with former mayor Rick Baker.

After class, she explained how some of the students in the class don’t necessarily know a lot about government – and some didn’t care to either. That's the opposite of the very politically minded students who take part in another class she teaches every four years called "Road to the White House," where students volunteer for campaigns before the New Hampshire Presidential Primary.

The national government class, by comparison, includes students from many majors across campus.

And even though this class is about national government, she wants them to know even more about their local elected officials.

“For most of the people who were here today, what happens at City Hall is going to have a much more direct impact, immediate impact on their lives and on our university campus than things that are happening at the White House,” she said.

in the recent class, Mayor Kriseman talked with students for more than 30 minutes about his positions and his opinion of politics today. He singled out the record amount of money he and rival Baker's campaign have spent campaigning.

“Close to $3 million (is) going into this race and really think about what that $3 million could have done if we were spending that money on something else," Kriseman lamented.

Later in the class, he spoke of how large donations from sources outside the city to his opponent have forced him to try to keep up. He also spoke of a recent City Council vote to ban such gifts, a move that will probably face legal challenges in light of the U.S. Supreme Court ruling in the Citizens United case. That decision allows for unlimited donations from corporations.

Kriseman also took questions from students on topics about the city's schools and how a local mass transit system could attract business.

Former Mayor and candidate Rick Baker initially planned to attend the class as well, but at the last minute, neither he nor a representative of his campaign were able.  McLauchlan said she has presented her students with information about his campaign and is still attempting to get him into class before election day - Nov. 7. We also reached out to Baker to get his thoughts about the class, but we didn’t hear back from him.

Kriseman acknowledged the importance of reaching out to a group of potentially undecided voters so close to Election Day. He pointed out to the class that it’s not just a cliché -that "every vote counts" – reminding students that he barely beat Baker in the August primary by 70 votes.

“This is their city, so it’s really important that they vote and have a say in what kind of city that hopefully they’re going to grow up in once they finish college and work and live and play in,”  Kriseman said.

He also liked the chance to talk to students who might one day want to be in his shoes as a potential candidate for office.

As for the students, management senior and lifelong St. Petersburg resident Diana Estrada said she used to mainly keep up with just national politics.

“Now, after taking this class, I’ve realized how much of an impact that local government has on our daily lives, and so it’s motivated me to stay up-to-date with the local elections and I’m more motivated now to actually get involved with my own community,” said Estrada.

And political science sophomore Benjamin Fishman said he researched both campaigns before he volunteered for one. It’s an experience that has strengthened his desire to be in politics.

“Calling the community, sending them text messages, any of that stuff has really shown me how the community gets involved," he said. "It’s relieving that people aren’t all across the board negative about politicians, especially on the local level.”

And Scourfield McLauchlan feels that’s the best thing – getting students to become more civic-minded, whether it’s running for office or campaigning for a candidate in the future.

“Many of them do go on to work for the candidates once they’re elected to office or continue to work on campaigns," she said. "Most of the feedback that I get is they don’t want to let an election go by and not get involved.”

Mark Schreiner
Mark Schreiner has been the producer and reporter for "University Beat" on WUSF 89.7 FM since 2001 and on WUSF TV from 2007-2017. In addition to serving as a producer, reporter, host and assistant news director, he serves as intern coordinator for WUSF News.
See stories by Mark Schreiner 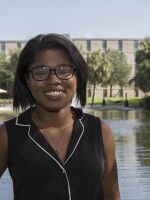 Kyanna Riggins
Kyanna Riggins is a digital news intern at WUSF Public Media for fall 2017.
See stories by Kyanna Riggins
Class of COVID-19
Exploring the high costs of the pandemic for children and young adults.
Learn More
Latest Stories
WUSF 89.7 depends on donors for the funding it takes to provide you the most trusted source of news and information here in town, across our state, and around the world. Support WUSF now by giving monthly, or make a one-time donation online.
Donate Now
Related Content