Your NCAA Bracket Pool Is Illegal, Especially In Florida

ShareTweetEmail
Listen
Listening...
/
Click here to listen to the audio version of this story.

Across the country, people have an estimated $10 billion  riding on the outcome of the men’s NCAA basketball championship.

Only a tiny part of that is being done legally, roughly 3 percent, according to the American Gaming Association. And while some states’ gambling laws are a bit gray, Florida’s gambling laws don’t leave a lot of questions on the matter.

Greg Ahern is one of the roughly 40 million Americans who’ve filled out a bracket predicting which team will win. And like many others, he has money on the line—$25 for each of the three brackets he entered. 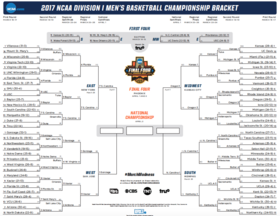 With North Carolina and Gonzaga still in the running, two of his brackets look like he has a pretty good shot at some kind of money this year: $300 to $1,000.

Ahern has been putting money where his mouth is for years. The pool he’s in now was set up by a high school friend, in high school.

“Back then it was like literally printed out brackets like what we have here in front of us now and he would, like, highlight,” said Ahern. “I mean, we were doing this when we were kids like handing cash in on envelopes and I’m sure teachers knew we were doing it and that wasn't a big deal.”

But according to Daniel Wallach, an attorney with Becker and Poliakoff P.A. who specializes in gaming law, while it may not be a big deal, it’s certainly a deal.

“An NCAA bracket pool would pretty much be gambling under any formulation [of a gambling law],” said Wallach.

And gambling on things like NCAA brackets in Florida is illegal.

“Where one could argue that picking a bracket pool involves knowledge of the college basketball teams, the matchups, you do all your homework,” explained Wallach. “And the argument that it's a skill game could conceivably make it legal in those states.”

The amount of chance that would need to be involved in a game to bump any betting into the illegal category varies depending on the state.

Florida, though, does not have this dividing line.

“Florida has a very unusual statutory provision which prohibits betting or wagering on both contests of skill and games of chance,” said Wallach.

So bracket pools like Ahern’s are technically illegal, but the chances you’ll get in trouble for it are really low.

“Zero percent,” said Wallach. “I'm not aware of any office workers who've been led away in handcuffs. So it’s just not one that Florida Law Enforcement agencies devote any resources to.”

The more you keep your betting offline, between friends and families, the more insulated you are, he says.

The exception would be if you were betting with lots of zeros or the organizer is taking a cut and the pool is being conducted online.

Greg Ahern says he’s not worried, and adds that the brackets are only fun if you’ve got a little bit of money riding on them.

The NCAA, for its bit, does not condone betting of any kind on its games—legal or illegal. And CBS, one of the more common bracket providers, does not collect money of any kind. Ahern isn’t buying it.

“I mean everybody kind of knows why people fill out brackets. It's not just to like say, ‘You’re great,’” joked Ahern.

Wallach hasn’t bet since high school: “It's a heck of a lot safer and more profitable to provide legal analysis and legal commentary on the games that other people are betting on than to bet on them [myself].”