Women To March In Tallahassee This Weekend 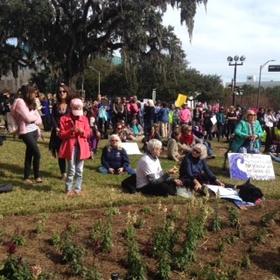 As thousands of women gather in solidarity this weekend, Tallahassee will be hosting its own women’s march. After low participation last year, a larger turnout is expected this time.

The Women’s March saw a sharp decline in participants between its first and second year, from 14,000 in 2017 to just 450 in 2018. Lauren Brenzel works with Planned Parenthood. Her group will be hosting the march. She says that the political climate is fueling more interest this year.

“People are feeling extra motivated right now with things like the government shutdown and with a proposed so-called fetal heartbeat ban in Florida… There’s a lot going on to make people get out and make their voices heard, particularly women,” Brenzel said.

The March begins this Saturday at 1 p.m. in Railroad Square. From there, participants will head to the Florida Capitol.

Here is the official schedule for the event:

Correction: An earlier version of this story had the final location of the march listed as Florida A&M University. That is incorrect. The organizers plan to end the march at the state Capitol builiding.