Suds and Science Mix as International Fest Comes to Tampa 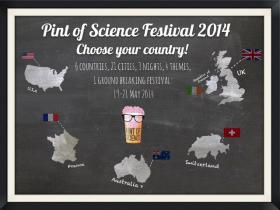 Scientists will be putting down the PowerPoint presentation and picking up a cold one at bars around the world next week, including at a quartet of Bay area pubs.

It's part of the Pint of Science Festival, which launched in the United Kingdom in 2012, and has grown to 21 cities in 6 countries this year.

The Festival encourages scientists to talk about their work in "plain English."

"We wanted to have an event that would help to demystify some aspects of science, research and what scientists do on a daily basis," said USF Health research associate Parmvir Bahia, who helped organize the U.S. portion of the Festival. "And we thought a nice way to do this would be to have people come out to a relaxed environment, i.e. their local pub, bar, and be able to listen to the speakers give you their research in their words."

The Festival will take place at 7 p.m. each night from Monday, May 19, to Wednesday, May 21 at The Amsterdam in downtown St. Petersburg, Datz and Dough in South Tampa, Florida Avenue Brewing Co. in Seminole Heights, and PJ Dolan's Irish Pub near USF's Tampa campus.