Wasserman Schultz Plans Fixes To Affordable Care Act, Speaks Out On Firing Of IT Staffer

Congresswoman Debbie Wasserman Schultz is moving forward to address problems with the Affordable Care Act (ACA) despite ongoing attempts by Republicans to repeal and replace it.

Wasserman Schultz met with an advisory panel of South Florida healthcare providers at Nova Southeastern University in Davie Tuesday to hear their concerns with the ACA and proposed solutions.

Bipartisan members of Congress are busy working on ways to fix the ACA, even if  the effort is not officially sanctioned, she said.

“Making sure that there are options available to debate and discuss is really important,” said Wasserman Schultz. “We can’t just sit and wait for the next terrible legislation and repeal effort that comes forward.” 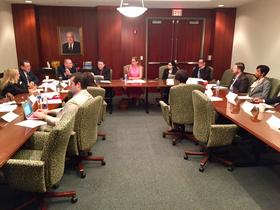 The congresswoman also spoke publicly for the first time on the firing of her former information technology aide, Imran Awan, after he and his wife were indicted on bank fraud charges.

In February, news reports surfaced that Awan, originally from Pakistan, was suspected of stealing information from computers of Democratic members of Congress.

Wasserman Schultz said she kept Awan on her payroll long after he had been fired by other Democrats because she was concerned he was being treated unfairly.

“I was concerned about racial, ethnic and religious profiling,” she said. “Once he was arrested and charged with a crime, I was satisfied that he was getting the due process that he needed and I terminated him.”

The congresswoman also called for removal of all Confederate monuments in the United States.

“Anything that has put a Confederate participant in a place of honor causes pain for individuals who faced hundreds of years of enslavement and torture,” she said. “They fought in the name of keeping people enslaved. That’s un-American.”

The government will make this month's payments to insurers under the Obama-era health care law that President Donald Trump still wants to repeal and replace, a White House official said Wednesday.

Consumers Will Have Less Help, Fewer Days To Enroll In Obamacare

Consumers who want to enroll in Obamacare for 2018 will have less help and a shorter time to do it.

Chart: See How Much Health Individual Insurance May Rise In 2018

The federal government released more details Wednesday about how much health insurance rates could increase next year in Florida — and the spike could be dramatic for some.

The Senate is expected to vote Tuesday on whether to advance health care legislation to the Senate floor. That would open up debate on an Obamacare repeal and/or replacement plan.

The importance of the vote was highlighted by Sen. John McCain's decision to return to Washington to take part. He announced last week that he had been diagnosed with brain cancer.

California’s Obamacare exchange scrubbed its annual rate announcement this week, the latest sign of how the ongoing political drama over the Affordable Care Act is roiling insurance markets nationwide.