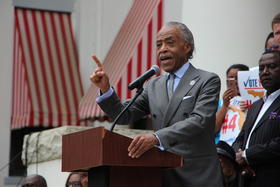 As an appellate court reviews an appeal by Governor Rick Scott and his cabinet in the battle for a new rights restoration scheme for felons, protesters rallied at the Capitol Thursday. Civil rights leaders urged support for a citizens’ initiative amendment on the ballot in November.

The Rev. Al Sharpton, flanked by civil rights attorney Ben Crump and local government and faith leaders, got a crowd of hundreds fired up to vote on Amendment Four in November. The rally came less than 24 hours after a federal appeals court granted the state’s Clemency Board a stay on a lower court’s injunction declaring its restoration system unconstitutional.

Sharpton echoed Florida’s gubernatorial candidates in saying the move is an attempt at voter suppression by Gov. Scott, who announced a U.S. senate run this month. 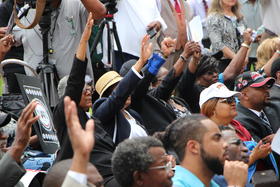 “Y’all got all these elections going around in Florida, telling me the governor wants to be a senator and all that,” Sharpton said. “Why are you afraid, Governor Scott, of more folk being allowed to vote?”

“We have a chance, November, 6, to restore that right, that opportunity and dignity for all Floridians,” Gillum said.

Nearly 1.5 million people in Florida are considered disenfranchised, having lost their rights after serving time for a felony conviction.

A federal judge on Tuesday ordered Florida to devise a new way to decide when and how former prisoners can get their voting rights restored, saying Gov. Rick Scott and state officials can no longer rely on "whims, passing emotions, or perceptions" in that process.

U.S. District Judge Mark Walker also blocked the state's current system of forcing most ex-felons to wait at least five years before they can ask to have their voting rights restored.

The system was put in place back in 2011 at the urging of Scott and Attorney General Pam Bondi.

Federal Judge Asked To Give Voting Rights To Ex-Prisoners

Florida's legal battle over voting rights for ex-prisoners escalated on Monday, as the state and a voting rights organization representing former felons made dramatically different requests of a federal judge.