Despite recent efforts by Congress to improve the performance of the Veterans Administration, some Tallahassee vets and even a local caregiver say their situation hasn’t improved. 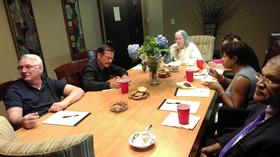 One of those local veterans is Timothy Atteberry. In November of last year, during some household repairs, he accidentally shot a nail through his thumb. He drove himself to Capital Regional Medical Center’s emergency room for treatment. The Veterans Administration was supposed to pick up what Atteberry’s employer insurance didn’t. More than half-a-year later, he received a letter from the VA denying him re-imbursement, because…

“You could have wrapped it up and driven yourself to Lake City and there’s an emergency department there. They could have taken it out there and taken care of it 100%,” he said, sharing the content of that denial letter.

Meanwhile, a Vietnam veteran from Tallahassee had originally been assessed by the VA as being 30% disabled. His condition got worse and his counselor gave him the go-ahead to seek full disability. The Veterans Administration denied the request, claiming the fact he was getting treatment meant he was getting better, not worse. Then there was Elizabeth Woodsmall’s situation.

“My brother who was 19 years old, he walked point, he did his service and he fell through the cracks. I spent 100s of hours on the phone with him because the VA wouldn’t pick him up,” she said, her voice betraying an obvious mix of sadness and frustration.

Donna Gillette is a Tallahassee counselor who has had several military veterans as clients and whose service fees were supposed to be picked up under the VA Choice program.

“It’s pretty tough on them. They can go round and round in a maze of paperwork and spent all their time and not get anywhere. And that’s what the providers are finding, too.”

That includes Gillette who, because of non-reimbursement, was forced to cut her veteran clients loose on Wednesday (6/7).

“I was going to say goodbye to them with a lunch and I thought while I’m doing that, let me get in touch with my representatives and the VA and the media to see if we can collectively put a push on Washington to make things better for the veterans,” Gillette explained.

“We have to double down efforts and I think the senator is committed to making sure that at the end of the day it’s the veteran who is being served and their quality health outcomes and their ease of access and ability to be sure that we’re taking care of our veterans.”

Later, the senator’s Washington office issued this statement on the matter from Rubio spokeswoman Olivia Perez-Cubas:

“Senator Rubio is committed to ensuring veterans have access to quality healthcare. That’s why he led the fight to pass legislation that will reform the VA by increasing accountability and protecting whistleblowers.”

Elizabeth Woodsmall hoped everyone involved will find ways to make things better and not just complain and point fingers.

“And we also can give the VA a bad rap, but there are wonderful people working there,” she asserted. “They’re just in a system that is so bogged down and I don’t know where the money’s going, but it certainly isn’t being spent on the front lines. And yes, there are so many elected officials that come to Stand Down, that come to the Memorial Day services and get their pictures taken with veterans, and we’re just asking them to back that up with operational funding.”

And while the Florida Legislature is in town, Woodsmall also was hopeful full funding might go to the state’s Veterans Foundation that provides direct support for the Florida Department of Veterans Affairs.

At the VA Hospital, Patients Often Wind Up in Court

One day in February, Salvatore Pelegrino, a cancer patient at the Veterans Administration hospital in Miami, was peeling an apple at a table on a patio outside the hospital when a police officer approached and confiscated his knife. Pelegrino, who uses a walker and breathes with the help of an oxygen tank, was handcuffed and detained at a facility on the hospital campus, then issued a ticket for carrying a knife with a blade longer than 3 inches.

“How would you like to deal with [the ticket], sir?” the judge asked Pelegrino in court, in April.

Despite $10B 'Fix,' Veterans Are Waiting Even Longer To See Doctors

Many veterans are still waiting to see a doctor.

Reports documenting scheduling problems and wait-time manipulation at the Department of Veterans Affairs are being made public, as the agency’s internal watchdog bows to pressure from members of Congress and others to improve transparency.

The VA’s Office of Inspector General released 11 reports Monday outlining problems at VA hospitals and clinics in Florida. The reports are the first of 77 investigations to be made public over the next few months.

Brandishing a photograph of 1,600 boxes, stacked haphazardly in a storage room, Florida U.S. Rep. Jeff Miller of Pensacola opened a congressional hearing Tuesday into the backlog of veterans benefits claims.