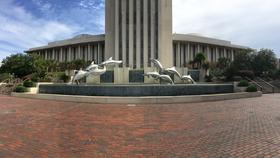 The official start of the 2018 legislative session may be months off, but some measures are already nearing the home stretch.  A veteran’s ID measure and a bill allowing Florida to share voter information with other states are just one stop away from the House floor.

The ID measure would give Florida vets the option to purchase a ten dollar identification card for proof of military service.  Polk County Republican Representative Neil Combee is backing the proposal.

“The card can be used anytime for proof of service is needed for military discounts at stores and businesses, as well as any discounts or fee waivers the state of Florida offers our veterans,” Combee explains.

“Currently there are active duty and reserve cards, retiree cards and VA-issued ID cards for those with a qualifying service connected disability rating,” he goes on, “however there is no official government issued veteran ID card that covers all veterans.”

Spano’s bill explicitly prohibits the state joining a program operated by the federal government or on its behalf.  Recent reporting from ProPublica has pointed to security concerns in a federal database meant to fight voter fraud.

Hillsborough County veterans with outstanding traffic tickets or past due court costs are being given a chance to resolve their minor legal issues.

The measure would create a matching grant program housed in the Department of Veteran Affairs.

Honorably discharged veterans could get a two-month break from sales taxes under a measure filed by Miami Democratic Representative Kionne  McGhee.