On a rainy night in Ballston Spa, New York, not far from Schenectady, a few dozen people pack into a veterans center. They've turned a small conference room into a makeshift theater.

Actor Stephan Wolfert, the director of a program called DE-CRUIT welcomes veterans to the stage.

"Plant your heels, breathe, share your truth, and seamlessly transition into the Shakespeare monologue," he tells the performers.

Wolfert wasn't always an actor. He was in the Army for a long time, but after a while, he felt broken and burnt out. He went to see a play, Richard III, and he remembers one monologue that he said basically changed his life.

"Richard III talking to the audience," Wolfert recalled," saying 'The war's over, I'm really good at it, now I don't fit in, what do I do? I'm lost.'"

The first time he heard that, Wolfert broke down. It hit on exactly what he was thinking and feeling. Not long after, he left the Army. And he had a hard time.

"We leave the military, we leave all of our structure, all of our mission, all of our training, all of our support, and now we have none," Wolfert said. "We're wired for war but never unwired from war."

Wolfert ended up going back to school and becoming a classically trained actor. There was something therapeutic for him about performing Shakespeare. And it got him thinking that maybe he could use theater to help others. 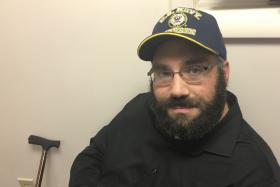 So he worked with psychologists at NYU to design the DE-CRUIT class. It's a seven-week traveling workshop where veterans use creative writing, Shakespeare, and breathing techniques to process their experiences.

"They read it, they remember it, and then they use the Shakespeare to purge it from their bodies," Wolfert said. "Then when they're done, it's out, and the description we get from all of them is 'I feel lighter.'"

One by one, veterans take the stage. This group has been through a lot: combat, PTSD, sexual assault, violence, drunk driving, poverty, illness, and death.

Steve Cipitelli, 32, is a Navy veteran. In 2011, he deployed to Libya. He got shot in the back and walks with a cane now. On stage, he listed some of the things he's gone through: back issues, PTSD, nightmares, flashbacks, tremors, anxiety, and more.

"Don't forget, not all wounds are visible," he told the audience.

Then, he recited Hermione's monologue from The Winter's Tale: "My past life hath been as continent, as chaste, as true, as I am now unhappy."

The audience sits, rapt and respectful, as each veteran performs.

Afterwards, Wolfert and volunteers pass out surveys. They've found that veterans who participate in the program report having fewer symptoms of depression and Post Traumatic Stress Disorder. They also measure veterans' heart coherence and take EEG readings. They found that over the course of the workshop, veterans appear to get less stressed.

Cipitelli said going on stage and speaking his truth was tough, but he felt buoyed by all the support.

"I knew I had all my brothers and sisters out there, veterans who had my back," Cipitelli said, "and that's how I was able to get through it."

December is a month of religious celebrations – there’s Chanukah and Christmas. It’s also a time when many service members are stationed far away from family and friends. Which leads to the question: How does the secular military take care of the spiritual needs of the men and women in uniform?

Among the many bills to be considered during Florida’s 2018 legislative session is legislation that would offer alternative treatments to veterans with post-traumatic stress.

Without An Honorable Discharge, Mental Health Options Are Limited

This month’s mass shooting at a Texas church has raised questions of whether the military does enough to help former service members with bad conduct discharges. They're not eligible for veterans' mental health care.