Education experts at the University of Florida are tackling an urgent question: How can schools be made safer without scaring or psychologically hurting students?

Listen
Listening...
/
Listen here to the conversation between WLRN's Jessica Bakeman and Philip Poekert, director of the Lastinger Center for Learning at the University of Florida's College of Education.

Education and psychology researchers at the Gainesville university are working together to develop training for school police officers that aims to improve their interactions with vulnerable children. Staff from the UF College of Education's Lastinger Center for Learning also recently conducted a six-week listening tour at schools around Florida. They're gathering input for upcoming research on how to redesign schools' emergency response preparation so that exercises like active-shooter drills are less terrifying for students. 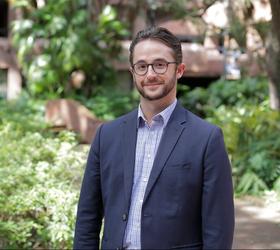 "What we are looking to do is … ensure that as we're preparing children for these kind of traumatic events that may happen in schools — like school shootings — we aren't traumatizing them in the process," said Philip Poekert, director of the Lastinger Center.

In 2017, UF received a $1 million grant from the National Institute of Justice for a 36-month pilot program training school resource officers in Miami-Dade County Public Schools. The work is even more relevant now, since last year's deadly shooting at Marjory Stoneman Douglas High School in Parkland and the Florida Legislature's subsequent passage of a law requiring at least one police officer or armed guard on every school campus.

As a result, the police presence in schools is increasing. Civil rights advocates are concerned about the potential detrimental impacts on children of color, those with disabilities or those who identify as LGBTQ, since research has shown students in these marginalized groups are disproportionately impacted by school discipline policies.

In the pilot program, school resource officers will take an online course to learn research-supported strategies for communicating with children who've experienced trauma.

"Trauma-informed practices … allow the adults in the school to have a better understanding of how to develop strong relationships with children who may be bringing significant emotional baggage into school as a result of adverse childhood experiences," Poekert said, "such as witnessing drug or alcohol abuse, or perhaps suffering from homelessness or neglect.

"These kinds of practices allow adults to create a more welcoming environment in which students are better connected and feel safer," he said. "Those kinds of practices are going to inform the work of school resource officers and of educators, so that they can intervene and identify the signs of trauma and handle them more appropriately."

As part of the training, school resource officers will also study how to better understand children from different cultural backgrounds and how to incorporate what's called restorative justice in addressing conflicts. For example, a student who is accused of bullying and his or her victim would take part in a conversation together about how to solve the problem and move forward.

Poekert said UF researchers are recruiting participants from around the state to participate in the training so they can study its effectiveness.

"If we're able to show some effects in improving the knowledge of school resource officers in this area, it has the potential to go national," he said.

Poekert is one of the lead researchers on that project. The others are Walter Leite, also of the university's College of Education, and Dorothy Espelage, of the Department of Psychology.

The Lastinger research center is in a more preliminary stage in another school-safety project: coming up with developmentally appropriate ways of preparing for emergencies. Poekert said the research would look at how educators should talk to children about potential dangers in a way that's appropriate for their age and level of development.

"We haven't actually created the specifics of the programming just yet, but I think it's pretty safe to say that speaking to a 5-year-old about an event like [a school shooting] and speaking to a 15-year-old is going to be a pretty different conversation," he said.

A recent Washington Post investigation found that millions of children in the U.S. have gone through lockdowns at school, and those experiences have had devastating consequences, including the potential for students to develop depression, anxiety and symptoms of post-traumatic stress disorder.

On a statewide listening tour, Poekert said he heard from more than 100 students, parents, teachers, administrators and elected officials in 20 counties, including Broward. Many teachers' chief concern was how to address their students' mental health needs.

He was struck by the enhanced security measures he saw in a Broward County school.

"I visited one school [where] the perimeter fence was chained and locked at all times in between student drop off and student pick up, such that visitors to the school had to call in to the main office in order for someone to come out to the gate and admit them onto the property," Poekert said.

"To me, it was an illustration of the lengths that schools are taking to ensure that students are safe," he said.

A Florida sheriff suspended this month by the governor and accused of failing to prevent a school shooting has requested a state Senate hearing.

Prosecutors pushed a judge Tuesday to set a trial date this fall for Nikolas Cruz in the 2018 Valentine's Day Parkland school massacre that killed 17 people.