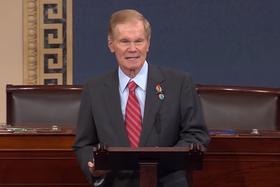 Speaking on the Senate Floor Tuesday, Nelson said while the Pulse tragedy could have divided the nation, the entire country came together instead.

Nelson is hoping Congress will take up legislation he partnered on with the state’s U.S. Sen. Marco Rubio (R-FL), almost a month after the mass school shooting in Parkland.

“Bipartisan bills to prohibit known or suspected terrorists from purchasing firearms, to empower our family members and law enforcement to take guns away from relatives who pose a danger to themselves, and others who bring up these so-called red flags,” Nelson added.

Still, he says while getting these bills across the finish line is a difficult task, they must still keep trying.

Five First Responders to the Pulse Massacre. One Diagnosis: PTSD

On the morning of June 12, 2016, police officer Omar Delgado pulled his cruiser up to his two-story townhome in Sanford and sat in silence for 15 minutes, trying to process what he had seen during 3 1/2 hours inside the Pulse nightclub.

A group of Pulse survivors and victims’ families have filed a lawsuit against the night club’s owners.

A federal jury has found Noor Salman, the widow of the Pulse gunman, not guilty on all charges.

Salman faced charges of providing material support to a terrorist organization and obstruction of justice. Prosecutors said she knew about her husband’s plans for the 2016 mass shooting in Orlando that killed 49 people.

With frustration mounting over lawmakers' inaction on gun control, the American Medical Association on Tuesday pressed for a ban on assault weapons and came out against arming teachers as a way to fight what it calls a public health crisis.