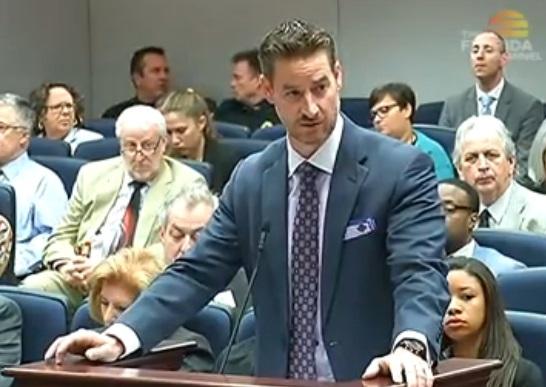 Two bills that will allow concealed weapons throughout Florida’s public school system are headed for the House floor.  But Nick Evans reports their prospects for final passage are very different.

Rep. Greg Steube (R-Sarasota) swung for the fences this session.  He’s filed a bill in the House altering taxes on internet sales, sponsored an expanded medical marijuana measure, and embarked on an attempt to fundamentally restructure the state’s alcohol regulations.  House committees have declined to take up the first two, and the process has altered his alcohol bill significantly.  But there are two other big swings where Steube seems to have connected.  The first measure would allow school district officials to designate specific campus employees or volunteers as on-campus concealed carriers.  He says police simply can’t respond quickly enough.

“The average response time in Manatee County is six to eleven minutes for law enforcement,” Steube says.  “In Sarasota County it’s five to nine minutes.  At Sandy Hook that shooter went in, killed twenty children, killed six administrators and then killed himself before law enforcement even walked in the building, and he did that in less than four minutes.”

Steube puts a $500 million price tag on getting resource officers in every school in the state.  He bases this on projections he’s received from the Florida Sheriffs Association.  Regardless of how close that estimate is to reality, there’s no doubt such a program would be expensive.  Steube’s bill avoids much of that cost by arming people who are already there.  Even though the bill passed its final committee Thursday, it could face an uphill battle.  Lawmakers postponed its companion in the Senate earlier this week, which is not great this late in the committee process.  But Senate sponsor Sen. Greg Evers (R-Baker) is optimistic he can get it back in gear.  Steube is also pushing a bill for concealed carry on university campuses.

“Suddenly we walk across this fictitious line of a college campus, and all of the sudden now our rights to self-defense are inhibited just because we’ve crossed this line,” Steube says.  “I don’t think that makes any sense.”

Unlike his K-12 proposal, Steube’s university bill puts the choice of carrying in the hands of a license holder rather than the school.  Florida State faculty Union President Jennifer Proffitt argues this sets Florida apart from most other states that allow guns on their campuses.

“30 other states allow guns on campus,” Proffitt says, “but it hasn’t been said that 23 of them allow the institutions to determine whether they want guns, and of the remaining seven, six have some sort of limitation, whether it means installing gun lockers so guns aren’t in the classrooms or in dorms, or faculty only carrying.”

Joining Proffitt in opposition were several other university faculty members.  The bill continues to move forward largely on the argument that college campuses are unsafe places made more dangerous by banning guns.  League of Women Voters representative Debbie Rumberger expresses frustration over the shifting fears of concealed carry’s supporters.

“When it was first introduced, it was about active shooting situations, being able to protect yourself in that situation,” Rumberger says.  “Now it’s become a question of sexual assault.”

But many students, like Ryan Terrell, argue adding guns to a violent situation like assault won’t make people safer.  He recounted a story from 2011 when he was working as a Florida House intern.

“I was walking home from the Capitol, crossing campus and was sexually assaulted,” Terrell says.  “Having a gun in that situation I would not be here today.  My assaulters had a weapon, and it was pulled on me from the moment that I first encountered them.”

“Having a weapon would not have saved me.  It would have caused me to lose my life,” he says.

Terrell went on, questioning the approach of loosening gun restrictions in the face of violence.

“Fundamentally this is placing the blame on the victims and not placing an emphasis on stopping assaulters from actually committing the act itself,” he says.

Students for Concealed Carry at FSU brought a number of supporters to the hearing, and lobbyists from organizations like the NRA and Florida Carry were on hand as well.  But with unified opposition to the measure among the university faculty, administration, and policing communities, Rep. Rodrigues asked a pertinent question—who is this really for?

What ‘Attack’ Is More Likely: Alligator or Gun?

Florida is one of 20 states that specifically bans firearms on college campuses, but the Florida Legislature is moving toward allowing guns on campuses.

A group that advocates for concealed carry of firearms on campuses recently told lawmakers that alligator attacks are more common than "attacks" by those with a gun permit.

A Florida State University expert says statistics are on the side of Republican lawmakers who want to allow concealed weapons on campus.

When State Representative Michelle Rehwinkel Vasilinda went to college, she brought a gun with her. She didn't think she'd need it.

With lawmakers split along party lines, a Senate education committee Monday approved a controversial bill that would allow people with concealed-weapons licenses to carry guns on the campuses of state colleges and universities.

The Senate Higher Education Committee voted 6-3 to approve the bill (SB 176), which has drawn opposition from many university leaders but has the backing of the politically powerful National Rifle Association.

A proposal allowing guns to be carried on public college and university campuses is gaining steam in the legislature. While the bill applies to all public higher educations in Florida—One school, Florida State University—is dominating the conversation.