Last week the renowned Key West Literary Seminar held its 36th annual gathering – and the theme of this year’s four-day event was “Writers of the Caribbean.” Thanks to President Trump, it turned out the organizers could not have picked a timelier subject.

As writers and readers arrived at the San Carlos Institute on Thursday, so did news of Trump’s alleged disparaging remarks about immigrants. Immigrants from majority-black Caribbean countries like Haiti. Places Trump reportedly called "shitholes" (though he has since denied using that foul language).

"This creates an urgency for Caribbean writers, because now we're talking about shithole people," said seminar participant Edwidge Danticat, an award-winning author and MacArthur Fellow who lives in Miami and was born in Haiti – where acclaimed works like her novel "Claire of the Sealight" are set.

"There are no bystanders anymore," Danticat told me. "When the President feels permitted to say something like that – irresponsible, racist, vulgar – and dehumanize people, then it gives others power to do the same.”

READ MORE: Hurricane Bonding: Did Irma Finally Make Us Care About the Caribbean?

Danticat was just one of the Caribbean writers at the seminar who made a literary call to arms to counter Trump’s race-baiting rhetoric.

"If we're going to talk about somebody like Trump, we're going to have to turn to the fantastical to understand that reality," says Jamaican-born Marlon James, who won the prestigious Man Booker Prize in 2015 for his historical-cum- fantastical novel “A Brief History of Seven Killings."

"You almost have to go back to the great dictator novels like 'Autumn of the Patriarch.'"

That Gabriel García Márquez work is one example of the Caribbean’s more surreal literary traditions. But whatever style you use to frame them, Trump’s comments clearly energized one of the Key West seminar’s missions: to showcase not just important Caribbean literature but also literature that showcases the Caribbean’s importance in the past – and future – of the Americas.

“This place that you thought of as marginal is absolutely central," says U.S. geographer and writer Joshua Jelly-Schapiro, author of the travelogue “Island People: The Caribbean and the World.”

Jelly-Schapiro points out Haiti’s 1804 revolution was one of the key events of the history of democracy in the western hemisphere – and today, he adds, the Caribbean is a key climate-change barometer.

“In this era when hurricanes seem to be getting worse and more frequent," he says, "in more ways than one we’re all in the Caribbean now.”

Indeed, two powerful hurricanes devastated much of the Caribbean last year; Hurricane Irma battered Key West. That reality hung over the Caribbean writers gathering as much as Trump did.

"We often look to the Caribbean to see what's coming next, whether it's weather or ideas," says Key West Literary Seminar executive director Arlo Haskell. "The storm season emphasized that."

And accentuated something deeper. If political colonialism preoccupied Caribbean writers in the 20th century, a sort of environmental colonialism does in the 21st. Carbon emissions from developed countries worsen the global warming, sea-level rise and climate extremes that most seriously affect the islands.

“That lack of empathy, it’s infuriating," Santiago says. "I think we’re going to be seeing some very passionate writing – I think we will all be writing about this hurricane in some way or the other.” 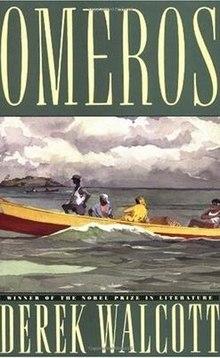 Santiago led a panel on that subject with author Tiphanie Yanique, a native of the U.S. Virgin Islands, also ravaged by last year’s storms. Yanique is part of a new generation of Caribbean writers who often engage that eco-anxiety.

“In my own work I’m directly taking on environmental destruction in the Caribbean,” says Yanique, whose 2014 novel “Land of Love and Drowning” is set in the Virgin Islands and was a finalist for the Orion environmental literature award.

“Now we are very aware of climate change in ways that when Derek Walcott was writing were not so clear to us.”

Walcott, who died last year, was the Caribbean poet and Nobel laureate whose pioneering legacy was honored at the Key West seminar. Yanique sees his masterwork – the epic poem “Omeros” – as a launching place for today’s Caribbean narratives.

“In Walcott's work the sea is doing this really vibrant, important work," she says. "It’s feeding us, it’s connecting us; it is our highways, our dinner tables. But in the Caribbean now we recognize the sea as being a new sort of menace – because of climate change.”

In one passage, “Omeros” does describe a Caribbean hurricane. When the storm passes, Walcott writes:

There would be brilliant days still/till the next storm, and their freshness was wonderful.

Caribbean writers say their challenge now is to find a new freshness. A new wonderful.

According to several news outlets, including The Washington Post, The New York Times and the Los Angeles Times, Trump reportedly questioned why the United States should accept immigrants from “s---hole countries” like Haiti, El Salvador and countries in Africa.

Donald Trump didn’t hold back when he referred to Haiti, El Salvador and African countries as “shithole countries” during an immigration meeting with lawmakers in the Oval Office on Thursday.