Tropical Development Likely in the Gulf by Monday

A tropical depression or storm is likely to form near the Yucatan Peninsula by Monday. It is then forecast to move north and potentially threaten portions of the Florida's Gulf Coast by midweek. Floridians from Pensacola to Tampa should closely monitor the progress of this developing situation. 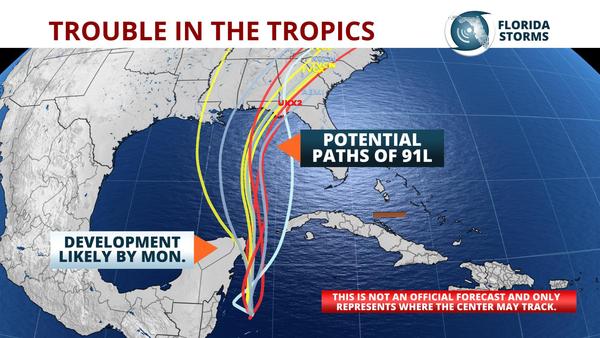 The system of interest, currently referred to as Invest 91 for the sake of modeling, was noted by the National Hurricane Center as showing “signs of organization” Saturday morning north of Honduras, but is lacked a well-defined center of circulation. This is likely due to strong upper-level winds (or wind shear) over the western Caribbean, which is likely to prevent it from developing through Sunday. However, forecasters believe conditions will become less hostile for tropical cyclone development when Invest 91 moves near or north of the Yucatan Peninsula by Monday. As of Saturday morning, the probabilities of cyclone formation were at 80 percent through Monday morning, and 90 percent over the next five days. 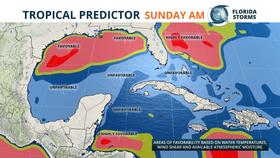 Longer range forecast data is in general agreement that Invest 91 will move north into an environment more favorable for strengthening over the central Gulf of Mexico by Tuesday or Wednesday. Upper-level winds are then expected to steer the potential tropical storm north or northeast toward the U.S. Gulf Coast by Thursday.

A credible forecast can not be made this far out on precisely where Invest 91 will track, nor is it scientifically possible to project how strong it may become. However, there is an increasing concern that tropical hazards from the developing storm may affect portions of Florida's Gulf Coast, anywhere from Pensacola to Tampa, by Wednesday or Thursday. Residents in these areas are urged to stay informed of future forecasts related to Invest 91.

The first thing that hit Ashley Simpson when she opened her car door was the smell: a rotten, stale, mold smell, leftover from the sewage-contaminated floodwaters that engulfed her silver 2010 Chevrolet HHR Cruiser during Hurricane Florence. The next thing to hit her were the gnats flying out that had been breeding amid the mold for nearly a week.