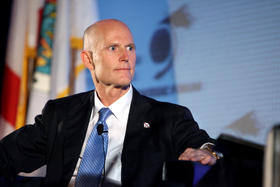 A trio of bills are heading to Governor Rick Scott’s office this week - the final step before becoming law.

Senate Bill 220 streamlines the process of foreclosing a debtor’s property by using evidence from their bankruptcy case. The Bill’s sponsor, Sen. Kathleen Passidomo (R-Naples), says this will address a problematic loophole.

“This bill closes the loophole where by a debtor in a federal bankruptcy proceeding agrees to surrender real property, but then reneges on that agreement in a foreclosure proceeding in state court," Passidomo says.

Currently, any evidence a debtor uses in their bankruptcy case does not automatically transfer over to a foreclosure case.

This bill allows certain documents from an individual’s federal bankruptcy proceedings to be used as evidence in a state foreclosure case against them. The documents must prove that the individual fully intends to relinquish their property, and will follow through.

In 2014, the legislature determined dependent children with special needs are entitled to have constant legal representation throughout their dependency cases, which ultimately provides them with the services and healthcare they need. In order to save money, the state allowed these children to be represented by pro bono attorneys. These attorneys are not compensated for their work, and pay due process costs out of their own pockets.

Bean’s measure requires the state to cover all due process costs for pro bono attorneys representing children with special needs.

The Justice Administrative Commission reports, since 2014, the state would owe pro bono attorneys $27,006 in due process costs, compared to the $3,537,216 it spent on appointed attorneys. For Bean, covering due process costs for pro bono lawyers would ultimately save the state money in what it spends on compensating lawyers.

“We’re gonna be better off financially because, of the little money we pay for court costs, we save the millions of dollars in hiring attorneys. So it is a solid win win around,” Bean says.

The Federal Communications Commission reports that it received 155,282 consumer complaints about automated phone calls throughout 2017 - some even violating the Do Not Call List.

Young’s measure expands the Florida Do Not Call Act by prohibiting unsolicited ‘ringless’ voicemail messages by Telemarketers. In addition to that, telephone sales calls must provide a consumer’s caller ID with a telephone number capable of receiving calls and connecting consumers to the solicitor.

Those that violate the Do Not Call Act will receive a fine up to $10,000. Young says this will send a strong message to telemarketers.

“This bill is about protecting and respecting the privacy of Floridians who are needlessly harassed by unscrupulous telemarketers. We are saying, by passing this bill, that enough is enough. And if we say do not call, that means do not call,” Young says.

Governor Scott has seven days to either sign off on each bill or strike them down entirely. If neither is done in that period, the bills will be made law without his signature.

Florida lawmakers want to restrict certain abortions for women in their second trimester. Judges in other states have struck down similar laws as unconstitutional. But legal concerns are not slowing the bill down. A warning, this story may be distressing to some.

The Florida Senate has unanimously passed a bill that allows state lawmakers to visit schools in their district, on any day and any time. That currently only applies to school board members as well as members of a charter school governing board. And, right now, principals or superintendents have the option to refuse a lawmaker’s visit or limit the scope of the visit. So, under Sen. Dorothy Hukill’s (R-Port Orange) bill, legislators can give a “heads up” or make it a surprise visit.

Florida could ease some of the restrictions now in place for so-called payday loans.

The state’s lawmakers are hard at work in Tallahassee as the 2018 legislative session continues. This week on the latest edition of our monthly Florida Matters news roundtable series we’re talking about some of their priorities and how they could affect residents.