Is There Room For Sentencing Reform In Opioid Crisis Bill?

A bill aimed at criminalizing the deadly drug fentanyl is heading to the Senate floor. The measure comes as the Legislature is struggling to respond to the state’s opioid crisis. But the plan has lawmakers questioning whether they should combat addiction with punishment or treatment. 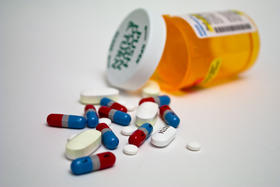 The scope of Florida’s opioid crisis is hard to escape. Recovering addict Katherine Johnson is living it.

“I was brought up in a middle class family. My parents are still married to this day. I was given everything I needed growing up. Didn’t want for anything. In my addiction I ended up homeless, living on the street and sleeping outside,” Johnson said.

Many prescription drug users are turning to heroin for a cheaper and often deadlier high. To meet the demand, dealers are increasingly adding fentanyl and carfentanil to the mix, says Sarasota Republican Senator Greg Steube.

“These drug dealers are splicing fentanyl and carfentanyl with heroin. Apparently if it doesn’t kill you, it gives you a bigger high,” Steube said.

Those synthetic drugs can range between 50 to 5,000 times as powerful as heroin. And Steube says death rates are spiking.

Steube is sponsoring a sweeping bill he hopes will crack down on the state’s opioid crisis. The measure would create new punishments for trafficking in four grams or more of the synthetic drugs. Sheriff Rick Wells of Manatee County says that’s a significant amount.

“Four grams of fentanyl is a lot. 2.2 milligrams is what’s being sold out there on the street. That’s what killing people as we speak,” Wells said.

Under the bill, dealers could be charged with felony murder if the user dies. And the trafficking charges would carry mandatory minimum sentences beginning at three years. The thought of taking more oversight away from judges is spurring a lot of debate. St. Petersburg Democratic Senator Darryl Rouson says dealers deserve to be punished, across the board.

“We’re talking about trafficking and not mere possession. And those who seek to profit off the illnesses of human beings I think need to be treated a little differently,” Rouson said.

Rouson sees dealers as the villains, and users as the victims. But some lawmakers think that line isn’t so clean cut. Orange Park Republican Senator Rob Bradley wants judges to ask those questions, and to analyze each case individually.

“We empower judges in the fact-finding process to do that. And I think it’s possible to be very serious about this scourge and to be tough on this scourge and also to understand that every case has its own individual facts,” Bradley said.

For years, some lawmakers have wanted to rollback mandatory minimums for drug crimes. They want judges to be able to give lighter sentences, or emphasize medical treatment instead of jail time. St. Petersburg Republican Senator Jeff Brandes isn’t convinced mandatory minimums lead to less abuse.

Brandes sees an opportunity to pass the reforms, by piggybacking his plan onto Steube’s bill.

“This issue has died on its own year after year after year. And we feel like these types of bills, that we know that will make it through the process, are the appropriate ones to have a conversation with on this type of issue,” Brandes said.

He says he’ll make his case again when the measure heads to the Senate floor.

According to official records, more than 1,000 people in South Florida overdosed last year on opioids including heroin and carfentanil -- a drug so potent it’s used as an elephant tranquilizer.

The growing threat of the opioids epidemic is mobilizing law enforcement and community leaders to form new partnerships and collaborate in events such as last week's discussion hosted by Florida Atlantic University (FAU).

Facing pressure to address drug overdoses across the state, Gov. Rick Scott and Attorney General Pam Bondi rolled out plans Tuesday for a series of workshops and gave support for legislation focused on opioids and drug abuse.

What Doesn't Kill You Can Maim: Unexpected Injuries From Opioids

The trouble started for Lisa when she took a blood pressure pill and one to control seizures, along with methadone, a drug used to help wean patients off heroin.

"I inadvertently did the methadone cocktail and I went to sleep for like 48 hours," Lisa says, rolling her eyes and coughing out a laugh. "It kicked my butt. It really kicked my butt."

Both prescription and illegal opioids are driving a national spike in overdose deaths. According to the Centers for Disease Control, they were involved in more than 33,000 deaths in 2015. Florida has seen a dramatic increase in opioid-driven overdoses, up more than 20 percent.  Yet, lawmakers are still grappling with how to address the issue.