Their Only Option: Uninsured Struggle To Find Mental Health Care

During a routine visit at the St. Petersburg Free Clinic, Dr. Ajoy Kumar was going over blood test results with a 46-year-old patient named Paul.

He was there to refill his blood pressure medication but in the middle of the conversation he broke down.

Kumar, who specializes in family medicine, shifted into the role of counselor.

"Do you ever think you're going to hurt yourself? Kumar asked.

“I've thought about it," Paul said.

“Have you ever tried?”

We're not using Paul's last name to protect his identity. He tells Kumar that sometimes he drinks too much, his marriage is in trouble and his friends mock him. He's never told anyone this.

Kumar estimates about 60 percent of his patients have some sort of mental health condition. And that's similar to free clinics across Florida, which see patients with no insurance or ability to pay.

For those patients there are few options for mental health treatment, unless they are a danger to themselves and are institutionalized.

“The United States health care system does a bad job of managing mental health,” Kumar said. “In Florida, we don't do a very good job of that either.”

“We can keep people alive for decades,” Kumar said. “But we don't come close to managing what does it mean to live a meaningful life.” 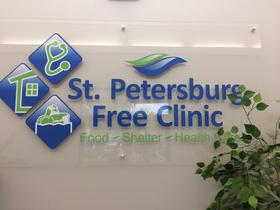 One in five Americans will be diagnosed with a mental illness over the course of their lifetime. The Affordable Care Act expanded access to mental health services but the patients who use the free clinics can't afford Obamacare.

If a patient's condition was sparked by a trauma, a crisis center can provide resources. But those centers may be limited in how they can help people with bipolar conditions or other general mental health disorders.

Groups that want to help are put in a tough position, said Rodalie Bousher, president of the Pinellas County chapter of the National Alliance on Mental Illness, or NAMI.

"The toolbox I don't think exists anymore,” Bousher said. “I think we are pulling at straws now. Where can we get this person help?”

But Bousher says patents with severe problems often end up in hospitals instead of clinics, where they can get ongoing, preventative care. Others face long waits for counseling and treatment.

Many turn to drugs and alcohol to self-medicate.  And the stigma surrounding mental health issues makes people reluctant to come forward.

Sometimes the remedy is handing a spiral notebook and an ink pen to a patient to get them to put their feelings down in writing.

That's what Dr. Ajoy Kumar suggests for his patient Paul, who broke down during an appointment at the St. Petersburg Free Clinic.

Kumar also sets another appointment to meet and talk with Paul. Before Paul leaves, Kumar warns him about the long road ahead.

“The journey that you and I will take won't be easy, OK?” Kumar said. “But I think you will learn a lot from yourself."

And for the first time, they will focus on fixing what's inside his mind.

This story and the “Their Only Option” series is produced as a project for the University of Southern California Center For Health Journalism’s National Fellowship.

Their Only Option: Clinic Helps Patients Get $90,000 Hep C Cure

Dr. Ronald Cirillo and his assistant at the Turning Points free clinic in Bradenton are testing another patient for hepatitis C.

Their Only Option: Free Clinics Hear Confusion Ahead Of Obamacare Enrollment

When patients come to The Outreach Clinic in Brandon, one of the first people they encounter is Jackie Perez.

Their Only Option: Free Clinics Provide Care For Uninsured

A mild stroke sent St. Petersburg resident Lori Ngo to the hospital in May.

She was feeling a pain in her leg, but didn't think much of it.