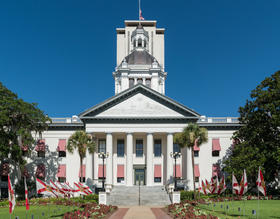 As the 2018 legislative session gets under way Republicans are forging ahead with a plan to make it harder for future lawmakers to raise taxes.  The initiative has broad support among GOP leaders, and they’ve got enough members to send the idea to the ballot.

“Today we heard the governor pledge to do everything within his will to force legislators to contemplate living within their means rather than taking the easy way out and raising taxes,” Rep. Tom Leek (R-Daytona Beach) told committee members.

His bill would require a two-thirds supermajority in both chambers before future Legislatures could raise taxes.  The plan would need to gain approval at the ballot box before taking effect.

The idea isn’t all that uncommon—fifteen other states already require some kind of supermajority for tax hikes—and the measure serves a handful of purposes for the GOP.  Most obvious, it could hamstring a hypothetical future legislature controlled by Democrats, and help drive republican voters to the polls this November.  But it’s also a bit of legacy burnishing for Republicans’ response to the Great Recession.

“Some have asked if this proposal would be in effect during a financial emergency or another national recession,” Scott said during his state of the state speech,

“And my answer is clear—absolutely.”

Governor Scott and Republican legislative leaders argue Florida’s recovery from the Great Recession is a direct product of their fiscal conservatism rather than a broader national trend.  Passing Scott’s supermajority could effectively lock in his approach to financial downturns in the future.

“I was reading the bill and I think it’s a very interesting concept because it basically means that tax policy should be a bipartisan issue,” Moskowitz says. “It should require two thirds, and in this day and age here that would be bipartisan in nature.  But I noticed that the bipartisanship stops when it comes to decreasing taxes.”

The Coral Springs Representative says the supermajority should apply for increases and decreases.

“I’m just trying to think in advance that if this is such a good idea and a concept on tax policy that we should have two thirds majority to raise taxes,” he goes on, “we should just have a two thirds across the board whenever we’re dealing with taking or giving away state revenue.”

His amendment failed on a voice vote.

Not surprisingly, organized labor objects to the supermajority as well.  Lobbyist Rich Templin argues Rick Scott’s tenure has seen a continual erosion of social services and hampering future revenue increases won’t help the problem.  He admits the initiative would be popular, but he urges lawmakers to drop it.

“It’s easy to oversimplify, it’s going to be easy to pass but that doesn’t make it right,” Templin says.

“Every one of you are here in these seats based on a majority vote,” he continues, “Public policy should also be decided the same way your representation was decided—a majority vote.”

But it the resolution passed easily out of the House Appropriations Committee with one Democrat—Rep. Katie Edwards from Sunrise—joining Republicans in supporting it.  All that’s left in the House is a floor vote where Republicans have more than enough members to reach the three fifths requirement necessary for ballot measures.

Sen. Kelli Stargel (R-Lakeland) has filed the Senate version, but it hasn’t received committee assignments yet.  Assuming her bill makes the Senate floor, Republicans have just enough members to meet the ballot threshold.

Tax Increase Or No? Lawmakers Start Sparring Over Ed Funding

For the past several years the Florida House and Senate have battled over how to pay for public schools. Now the House is drawing a red line over what it will and won’t do when it comes to deciding how to appropriate those funds.

Gov. Rick Scott, expected to run for U.S. Senate next year, wants lawmakers to put on the 2018 ballot a proposed constitutional amendment that would make it harder for future legislators to raise taxes.

Three professors from Florida International University and a peer from the University of Miami visited Congresswoman Ileana Ros-Lehtinen’s office earlier this week to share their concerns about the plan.