A Swan Song For Some Military Bands: Budget Cuts Stop The Music

The military has more than 130 bands with more than 6000 musicians. But their cost – about a half-billion dollars a year – has made them a target for budget cutters in Congress and at the Pentagon.

Budget cuts are taking their toll on part of America's military tradition – its bands.

The armed services have more than 130 bands and some 6000 musicians. But their cost has made them a target for budget cutters in Congress and the Pentagon.

The military has reduced its number of bands by almost 10 percent since 2012. In 2019, five more bands and two detachments will cease to exist.

"It seems to me that there is a value to having military bands," said Brandon Arnold of the National Taxpayers Union, a conservative group that's lobbied Congress to reduce the bands' funding. "But does that value exceed things like necessary equipment, personnel costs, weapons systems, things like that that are absolutely essential in the theater of combat?"

'Music is our most lethal weapon'

The 323rd Army Band at San Antonio's Fort Sam Houston, is one of the musical groups targeted for elimination in 2019. Known locally as "Fort Sam's Own," they routinely play both on and off base at events such as military funerals, parades, flyovers, and pre- and post-deployment celebrations. 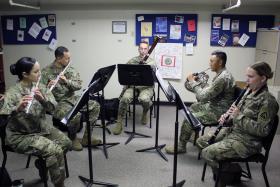 At a recent ceremony for newly naturalized citizens in downtown San Antonio, the band ran through a repertoire of patriotic songs such as "God Bless America," as well as pop standards such as "Misty."

"Our job is to tell the Army's story," said bandmaster Jonathan Ward. "Music is our most lethal weapon in telling the story."

Ward joined the Army in 1994 after spending time as a freelance musician and member of several symphonies in North Carolina. He's performed in Tikrit, Baghdad, and Seoul.

Ward was thrilled when he learned he would be stationed with the 323rd Army Band at Fort Sam Houston.

"When they said I was coming here, I said, 'Fantastic.' Then shortly thereafter they said, 'And we're shutting it down in '19,'" Ward said.

The 323rd has fallen victim to the Total Army Analysis Process, a restructuring measure aimed at making the Army more efficient.

As a result of the process, bands are also scheduled to be deactivated at Redstone Arsenal, Alabama; Fort Eustis, Virginia; Fort Huachuca, Arizona; Fort Gordon, Georgia; and Fort Rucker, Alabama.

Arizona Congresswoman Martha McSally, a Republican, has been trying for years to reduce spending on military bands. Last year, she argued on the House floor to restrict the bands from playing at social events like dinners and dances.

"Let me tell you, in my 26 years in the military, I used to be at Christmas parties with wing commanders and generals, and we would have active duty military entertaining us. And it bothered me then," McSally said.

The government is now trying to determine how essential bands are. But it's not as easy to measure the value of music as it is a weapon system or a battleship.

Last year, Congress commissioned a study to review military bands. The Government Accountability Office recommended that the military come up with metrics to determine if the bands are achieving their mission.

"The starting point is from the information that they already currently collect," said Andrew Von Ah, who directed the study. "Either online or from surveys or from crowds at the performance. In terms of how well they're inspiring patriotism and doing those types of things."

Military bands have a long history in the United States and around the world, and it's rooted in practicality as much as patriotism. Most U.S. Army regiments had their own bands and in some cases their own songs. 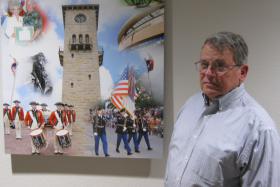 "If there's drums beating and you're walking along, pretty soon you'll be walking in step with the beat of the drums," Manguso said. "You can use that to regulate the movement on the battlefield."

"In the garrison situation, the bugle sets the schedule for the day. It wakes you up in the morning, says when the formation is, it announces the meals, when there's meetings. And it signals the end of the day," Manguso said.

Over time, most armies came up with extensive lists of bugle calls to regulate activities.

For now, the show goes on

Ward of the 323rd Army Band sounds tired when he talks about music in terms of money. He says that military bands are low-hanging fruit for budget cutters.

"If we have to do without something, what are we gonna do without? We'll do without the arts. It's a luxury," Ward said. "Or at least in a lot of people's minds, it's a luxury. In my mind it's not a luxury, it's a necessity. It is exactly what you fight for."

For Ward and his bandsmen, the show will go on. Many members will be moved to other band posts once the lights go out at Fort Sam Houston.

"Fortunately, we're all soldiers at the end of the day, so there's a resolve in saying, 'you know what, we're going to play up until the very end,'" Ward said.

VA Prepares for PBS Vietnam Documentary; It May Trigger Some Vets' PTSD

The ten-part documentary by filmmakers Ken Burns and Lynn Novick is at times graphic, and people who work with veterans say it may trigger traumatic memories for those who fought in Vietnam.

For U.S. troops in Vietnam, the "China Beach" surfing spot provided a rare recreational outlet during the war. Some still seek healing from the waves.

Military families move a lot, and that makes it hard for service members’ spouses to hold steady jobs. About half of military spouses are either unemployed or underemployed – and that can take a toll on their families, their earning power, and the economy.

Veterans’ issues were among the few things Congress agreed upon – before taking their August recess. That included senators confirming three new judges to the U.S. Court of Appeals for Veterans Claims to reduce the massive backlog of disputed veterans’ claims.