You're Invited! Join WUSF For a Florida Matters Taping 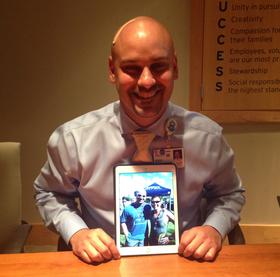 In the coming weeks, public television stations across Florida will air a new documentary by Ken Burns. "Cancer: The Emperor of All Maladies" aims to tell the complete story of cancer, from the first accounts from ancient Egypt to modern research facilities, and the stories of patients.

On Saturday, March 28, WUSF News and Health News Florida will present a screening of the documentary, and a Florida Matters panel discussion on the past, present and future of cancer. The event is free, and you can register online here.

One of the panelists is Joshua Rivera, who was 27 when he was diagnosed with Ewing’s soft-cell sarcoma.  He has been cancer-free for more than five years.

He said he started to notice symptoms, and was at one point misdiagnosed with a bacterial infection.

“Urinary incontinence, problems in my testicular region with blood flow, and I had kind of ignored severe constipation,” Rivera said. “I was thinking it was just diet or something else, and it had been going on for several months.”

A CT scan revealed a large mass in his abdominal cavity, and days later, he started treatment at Moffitt Cancer Center in Tampa.

"It's a very rare tumor. It's mostly in kids, but even with children, it's only 2.5 percent of the tumors that occur in children are Ewing’s sarcoma, and it's usually in the bone,” said Dr. Dan Sullivan, one of the oncologists who treated Rivera. "So to have an extra-Osteitis, means outside of the bone, Ewing’s sarcoma, in somebody that's over 25, is fairly rare, so he couldn't have picked one that was less common (laughs)."

Because the tumor hadn't metastasized, it would likely respond to treatment.

"So five drugs all together and you alternate three versus two drugs every other time. And it's a tough regimen to get through, lot of side effects, and somebody that's in their mid 20s, sometimes they don't want to come in on time for chemotherapy.”

"By the time you've done 14 or 15 cycles of chemotherapy, the patient is pretty tired, and they're wanting to get this over with, so doing a little mothering  …  and being a caregiver to him also, to make sure he was coming in and getting his chemotherapy on time, because we know if you get chemo on time, you do better in the long run,” Elstner said.

Numbers from the National Cancer Institute show the median age for cancer patients when they're diagnosed is 66. Rivera was in his mid-20s

Elstner has been a nurse at Moffitt for a decade, and she cares mostly for children and adolescents.

Sullivan, who also points out that a team approach to Rivera’s care was also important, agrees.

“You can't be really adherent to a very strict schedule, you have to somewhat adhere to that, you don't want to get behind on the chemotherapy, but you have to have some flexibility,” he said.

For Rivera, that meant going when the flow when he would insist on surfing and playing basketball.

He confessed to one time, when he finished chemotherapy on a Saturday morning, and headed south to go surfing with a friend.

“I never told them that story. They're just finding out, but you know what, I caught three waves that day,” Rivera said. “But for me, it was like mentally just being out there. Some people go to church, For me, being out in the ocean was my church, and with who better than one of my best friends, and we were just out there sitting on our boards and taking it all in, and thinking about how I just had taken chemotherapy, and you know, it didn't matter. Life goes on."

Joshua Rivera has about 1,100 hours of chemotherapy behind him.

Now, his biggest hope is for the future: to one day have children, who he can teach to surf.

-- Lottie Watts is a producer/reporter with WUSF in Tampa. WUSF is a partner with Health News Florida, which receives support from the Corporation for Public Broadcasting.

Record Run for Miles for Moffitt

Saturday was a record-setting day for Miles for Moffitt, both in terms of participants and in money raised for cancer research.

Around 7,500 people took part in the event, raising more than $594,000 for research at the Moffitt Cancer Center. Since starting in 2006, Miles for Moffitt has raised more than $2 million.

Running for Research at Miles for Moffitt

When Miles for Moffitt steps off on Saturday, May 10, Miriam Zimms will once again be there.

A bout with breast cancer four years ago didn’t stop her. Neither will last year’s bone cancer scare that saw surgeons remove a large section of her pelvis and replace it with a bone from a cadaver.

"I know that it will be an incredibly different type of walk for me this year because of the fact that I don’t have full mobility and I cannot fully walk on both my legs, so it will be a very different experience," said Zimms, who's undergone six months of physical therapy. She plans to walk about 300 feet or so at the event using either crutches or a walker, and her husband will push her the rest of the one mile in her wheelchair.

She's taking part, not just for herself but also for her loved ones. Her team of walkers and runners, the Guatemalan Globes, is named for her birth country and for the four other women in her family who’ve also battled breast cancer, including her mother, who died from the disease in 1992.

An estimated seven thousand participants are expected to join Miriam in taking part in Miles for Moffitt, a series of races and walks that raises money for research at the H. Lee Moffitt Cancer Center.

You wouldn't know it by looking at her, but Josalyn Kaldenberg has a bionic arm.

Even if you looked hard at her right arm, you'd only see a small scar, a barely noticeable, faint line that starts around her elbow and then runs up her arm. It looks like it could be the result of an injury any 11-year-old like Josalyn would have - maybe she fell off a swing or got injured rough-housing with her four younger siblings back home in Woodward, Iowa.

But that scar is actually historic. You see, under that scar, Josalyn Kaldenberg has an expandable, prosthetic upper arm bone - the first of its kind in a child in the United States.

'Champion of Change' Is Pacesetter for Prevention

Earlier this week, an outreach worker from Moffitt Cancer Center was invited to speak at the White House.

Tampa Mayor Bob Buckhorn made a lot of specific promises when he ran for that office, from improved parks and public spaces to incentives to get police officers to live in the city, and more.

How has he done on keeping those promises?