The Sunshine Economy: The Business of Betting

Gambling in Florida is a perennial issue for politicians and the public. It will be on this fall’s ballot for voters in two forms. One proposed constitutional amendment would ban greyhound racing. The other question is much larger: should voters have the exclusive right to expand gambling? If approved by at least 60 percent of voters, it would take that power away from state lawmakers.

The business of betting is growing again in Florida, especially at casinos. According to state data, after not experiencing any growth two years ago, Indian gaming revenue in the state was up almost nine percent in 2017. It is expected to be up another 4.5 percent this year.

Meanwhile, betting on horse and dog races in Florida and at jai alai frontons has continued falling.

Floridians, and visitors to Florida, increasingly are betting at casinos owned by the Seminole Tribe of Florida.

As the Indian gaming revenue grows, what the state collects from the tribe also increase, thanks to a deal dating back to 2010.

WLRN spoke with Seminole Gaming CEO Jim Allen. He also is chairman of Hard Rock International, which is owned by the Seminole Tribe. You can hear/read some highlights of their conversation below.

Indian Gaming Payments to the State

For every $1 in general revenue the state of Florida collects this year, about penny comes from the company led by Jim Allen.

This fiscal year the Seminole Tribe will send about $355 million to the state government. For that money, the Tribe gets to have the exclusive right to have card games like Blackjack and be the only slot machine operator outside of Miami-Dade and Broward counties.

Over the eight years the tribe and the state have had a gambling deal, the Seminoles have paid the state $1.8 billion. Over the next eight years, the state expects to collect over $2.8 billion from the tribe.

"If the state wants to expand (gambling), which we completely respect it's the state's prerogative, that's fine. But then, obviously, that's when the compact payments of revenue share come into a conversation," says Jim Allen, Chairman of Hard Rock International and Seminole Gaming CEO.

Under the 2010 agreement, the tribe has the exclusive right outside of Miami-Dade and Broward counties to operate slot machines until 2030. The banked card game exclusivity lasted only five years. In 2015, when it expired, the money paid to the state was put in jeopardy, even though the tribe kept making payments. Horse and dog race tracks and jai-alai frontons offered competing card games, so the tribe sued the state and won. Florida agreed to clamp down on banked card games not at Seminole casinos.

"If somebody wants to expand the scope or potentially erode the scope, then clearly the partners should be talking. If the state wants to go in a different direction, the tribe is completely respectful of that," says Allen. "But we're not going to pay the state of Florida $400 million a year. You can't have both. It's either one or the other."

The Seminole Tribe of Florida is the second largest contributor to a campaign supporting Amendment 3. It has given almost $12 million. Disney has donated more than $14.5 million. The two are working together for the ballot measure asking Florida voters to take control of any future gambling expansion. If at least 60 percent of voters this fall approve the constitutional amendment, only voters -- not the state Legislature -- would be able to expand gambling.

The tribe owns a half dozen casinos in Florida, including the Seminole Hard Rock Hotel and Casino in Hollywood.

Past efforts at gambling expansion, Allen says, reduced "our enthusiasm to continue to create jobs." 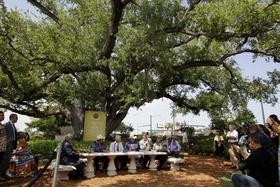 The state constitution was used in 2004 to expand gambling. An amendment allowed voters in Miami-Dade and Broward to decide to give the green light for horse and dog track owners and jai-alai frontons to install slot machines. Eventually, voters in both counties okayed the expansion and the racino came to South Florida.

"We truly believe the issue is you have too many interests. International ventures, Las Vegas ventures, gaming company interests, publicly traded companies, parimutuel dog tracks...the list is so long."

WLRN: All of those interests represent potential competitors for you in gambling if there is expansion, do they not?

ALLEN: They certainly could. But if someone did the math, no doubt short-term it's better for the tribe.

Because we would no longer be paying the state of Florida $300-$400 million a year. And if we have an additional $300-$400 million, it creates a very, very large sum of money to protect the tribe's existing business."

In May, the U.S. Supreme Court struck down a 1992 federal law and in doing so opened a new front in the gambling business -- the sports book. The court ruling cleared the way for states to pass their own sports betting laws if they choose.

Before the decision, most of that legal sports betting had to be done in Nevada. Since the ruling, at least four states have allowed gamblers to bet on sports. Florida is not one of them.

It puts the Seminole Tribe casinos and it’s Hard Rock brand in an interesting position. Hard Rock runs a casino in New Jersey, which has legalized sports betting. When Hard Rock held a grand opening this summer for its hotel and casino in Atlantic City, CEO Jim Allen announced a partnership with British online sports betting firm Bet 365.

In South Florida, Hard Rock has a very public relationship with the Miami Dolphins. Two years ago, the NFL franchised signed an 18-year deal to name the stadium Hard Rock Stadium. It’s close to a $250 million naming rights deal putting the name of a casino operator on the home of an NFL team.

"There are certain terms of that agreement that we are complying with," says Allen. "We certainly do not have the mindset that we want to create the line of an in-house (sports) book."

Allen won't say if the stadium deal with the Dolphins precludes the tribe from having its own sports betting operation. He calls the topic "very fluid."

As legislative leaders hold behind-the-scenes talks about revamping the gambling industry, Gov. Rick Scott on Wednesday announced a deal that will lead to the Seminole Tribe continuing to pay more than $300 million a year in casino money to the state.

A political committee formed last month has raised $1.25 million to help fight a proposed constitutional amendment that could make it harder to expand gambling in the state.

The committee, Citizens for the Truth About Amendment 3, Inc., filed paperwork with the state July 18 and raised the money from Aug. 1 through Aug. 7.

Disney Worldwide Services, Inc. and the Seminole Tribe of Florida continue upping the ante as they try to pass a constitutional amendment that could make it harder to expand gambling in the state.