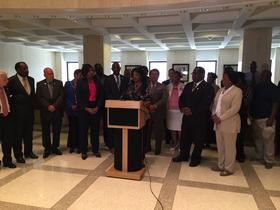 State leaders are attempting to make amends for the Groveland Four—a group of black men wrongfully convicted of raping a white woman in the 1940s.  It’s one of two major apologies lawmakers are planning this year.

The fourth floor rotunda is buzzing as nearly a dozen lawmakers gather to apologize to the family members of the Groveland Four.  Here’s House sponsor Bobby DuBose, a Democrat from Fort Lauderdale.

“I want to first start out by saying with this injustice we the state of Florida—we were wrong,” DuBose says.  “The injustice these men and their families encountered are hard to just truly put into words.”

A mob also lashed out against the local African American community, and burned the Shepherd family home to the ground.

To extract confessions, officers beat Greenlee Shepherd and Irvin.  Prosecutors never submitted those forced confessions at trial.  Still, all-white juries convicted each one.  Thurgood Marshall, then an attorney with the NAACP, got the convictions overturned at the US Supreme Court.  After that ruling Sheriff Willis McCall shot Irvin and Shepherd while transporting them to a different facility—Shepherd died.  McCall claimed self-defense, and again, an all-white jury agreed—clearing him of any wrongdoing.

McCall was also present when the posse killed Thomas after he fled Groveland.

“The memories can’t be erased,” DuBose says.  “The pain they’ve endured can’t be fixed.  But today we have an opportunity to provide closure to these families in the form of an apology.”

A number of family members are on hand for the occasion.  Carol Greenlee is Charles Greenlee’s daughter.

“I feel like I can sit down with my nieces and nephews and brothers and tell the story that my father at my age—forty—held back the tears to tell me.”

“Our home was the one that they raided and burnt down and sent my grandma and granddad running from Groveland—the area,” Shepherd says.  “So I never really got a chance to meet my granddad I just meet him through this.  I meet Sam through this.”

And it’s not the first time this session lawmakers have held this kind of gathering.  Earlier this month Sen. Darryl Rouson (D-St. Petersburg) spoke in favor of an official apology for the children abused and killed at the Dozier School for Boys.

“Today is the next step for this Legislature to honor their memory, and to declare with honesty, conviction and clarity that these types of atrocities and tragedies should never occur again,” Rouson said.

Like the Groveland Four, lawmakers have been pushing the Legislature to recognize what happened at Dozier for years.  Official apologies are relatively rare.  But this year a number of influential Republicans, including House Speaker Richard Corcoran, have signed on—giving the proposals enough support to gain traction.  The measures for Dozier and Groveland are resolutions, meaning they don’t need the governor’s signature.  But in the Groveland case, Governor Rick Scott may still have a role to play.  The resolution urges the governor and cabinet to review the cases and grant full pardons.