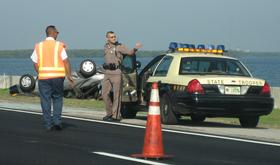 It’s that time of year when agencies lay out their plans for the coming year—and more importantly—how much those plans will cost.  Two of them are looking to hand out raises.

Florida’s Highway Patrol is facing a shortfall in troopers, and it’s asking state lawmakers for a raise to help attract and retain officers.  Department of Highway Safety and Motor Vehicles CFO Susan Carey says the agency needs about $17 million for the plan.

“This plan would increase the minimum salary for a sworn law enforcement officer to $42,000 and allow a trooper to move over a 20 year period to $60,000 annual rate of pay,” she explains.

Meanwhile, the Department of Agriculture and Consumer Services wants to increase starting salaries for its law enforcement officers and forestry firefighters.

“This year’s budget request seeks to recognize our hard working firefighters and law enforcement officers,” policy and budget director Derek Buchanan says, “by including $11 million to increase starting pay and improve retention of these positions.”

The request would increase starting salaries by $10,000 and give existing workers a raise of the same amount.  The agency employs 240 law enforcement officers and more than 600 firefighters.

The Florida Highway Patrol says low pay and high turnover aren’t hamstringing  Hurricane Irma response. But a union official says it shouldn’t take a mass evacuation to remind lawmakers of the value of the FHP.

Florida authorities say two deputies were injured by a crash as they'd been responding to another multi-vehicle collision.