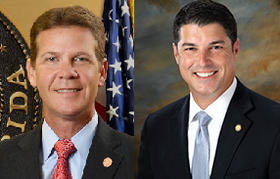 Health care spending was the defining issue of the 2015 Florida legislative session.

The Florida House and Senate were miles apart on the issue, and the disagreement sent the regular session to a screeching halt earlier this month.

On Monday, lawmakers will return to Tallahassee for a special session to try to pass a budget, but lawmakers appear no closer to an agreement on health spending, especially when it comes to an alternative to Medicaid expansion.

Earlier this week, Senate President Andy Gardiner offered a revamped proposal to offer health coverage to 800,000 Floridians, but the House and Gov. Rick Scott responded with a familiar refrain: they want no part of Medicaid expansion in Florida.

Scott said the proposal would cost the state $5 billion over 10 years, and House Speaker Steve Crisafulli said he doubted Florida would win approval for some of the requirements from the U.S. Department of Health and Human Services. He said the state would instead be left with a "costly and inefficient entitlement program."

WUSF’s Carson Cooper took a closer look at how the special legislative session came to be. He talked with Susan MacManus, a political science professor at the University of South Florida; and William "Windy" March, who covered the Florida legislative session for the Associated Press.

MARCH:  Well, it has to do with an impasse over health care, and the budget between the House on one side, and the somewhat, slightly less-conservative Senate on the other side.

To get down into the nitty gritty details of it, the Senate is in favor of expanding health care for low income people under the Affordable Care Act – also known as Obamacare. The House opposes that.

Whether that’s done or not affects, of course, how the budget is put together, and the result of this is neither side would give an inch. They arrived at an impasse, and the result was they were unable to agree on a budget.

COOPER: So, the patients would have some skin in the game in that?

COOPER: Florida House Speaker Steve Crisafulli said that most Floridians don’t care for this expansion. They don’t want Medicaid expansion. Was he on the mark with that? Or is he overstating a resistance to Obamacare in Florida?

MACMANUS: Well, Obamacare nationally and in Florida has never had a majority of the electorate say that they support it, but it’s been around 50 percent or so, 52 percent. The problem is that you can make those claims, but the polls have been all over the map, and the wording that’s used can create different results. And we haven’t seen any consistent, clearly wording polling that reflects the choices on the table.

COOPER:  Back in the Don Gaetz-Will Weatherford days, Speaker Weatherford was totally against Medicaid expansion, and so President Don Gaetz pretty much said, hey, if it’s not going to fly in the House, why even bother taking it up in the Senate? Now, this time, the Senate did not capitulate.  Why the difference this time?

Late in the session, both sides, both Senate President Andy Gardiner and House Speaker Steve Crisafulli, held  meetings with their Republican caucus members, who are of course the majority in each house, to line their troops up to whip them into line behind their respective positions. Neither side would give an inch.

For the House, that maintains the position they’ve had for the past couple of sessions. For the Senate to insist this strongly on the issue is what’s new and different, and my suspicion is that you’ll see the Senate cave in the special session.

Lottie Watts is a producer/reporter with WUSF in Tampa. WUSF is a partner with Health News Florida, which receives support from the Corporation for Public Broadcasting.

Republican leaders in the Florida Senate offered up a revamped health care proposal Tuesday in an effort to end a budget stalemate that threatens to shut down state government, but the proposal was immediately rejected by Gov. Rick Scott and House GOP leaders.

Legislators are scheduled to return to the state Capitol next week for a 20-day special session where they are expected to pass a new state budget.

Republican leaders in the Florida Senate offered up a revamped health care proposal Tuesday in an effort to end a budget stalemate that threatens to shut down state government.

GOP legislative leaders have been odds over health care coverage and the dispute derailed the end of the regular session. Legislators are scheduled to return to the state Capitol next week for a 20-day special session where they are expected to pass a new state budget.