The recent Red Tide outbreak in Palm Beach and Miami Dade county this week drew concern of another devasting bloom in Florida's waters, but some scientists say that the appearance of red tide on the east coast of Florida is not a rare occurrence.

Dr. Gale Gawlik, a biology professor at Florida Atlantic University (FAU), says this recent outbreak is nothing out of the ordinary.

"We saw one back in 1972. Remarkably similar conditions," Gawlik says. "[There were] strong east winds, there had been an outbreak on the West Coast, and we ended up with fish kills in Palm Beach County, respiratory problems, and so on. So very, very similar circumstances."

The Florida Fish and Wildlife Commission (FWC) outbreaks of red tide on the East Coast date back to the 1800s, but there have been only eight since 1953.

The algae came to the Atlantic from the Gulf coast via a current that connects the two bodies of water, which is common when looking at past outbreaks, according to the FWC.

Dr. Gawlik said that South Florida's Atlantic coast also has a strong northern current that would not allow the red tide to linger for too long.

The only lingering issue, he says, is the effect the algae will have on the food web.

"It's getting in organisms getting eaten," Gawlik says. "Those effects can remain for weeks." 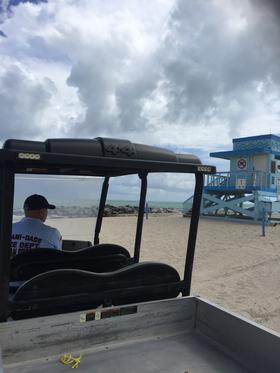 After testing, beaches in both counties reopened on Friday and resumed normal hours.

But Florida's Department of Health has made efforts to warn beachgoers of the health effects red tide can have.

Signs are posted on beaches, and local health facilities have been informed on how to treat Red Tide. People with severe or chronic respiratory issues are advised to avoid beaches.

State Says It Is Ready To Address Red Tide In Atlantic

Florida has money and resources ready as red tide that has lingered along the Gulf Coast has been detected in Palm Beach County’s coastal waters, Gov. Rick Scott’s office said Tuesday.

An airborne irritant has closed at least six beaches in one county along Florida's Atlantic coast.