Some Question How Safe Mopeds And Motorcycles Are For College Students

More than 500,000 motorcycles and mopeds are registered in the state of Florida. They’re a common vehicle for college students. They’re relatively inexpensive and an easy way to get around town. But some are questioning if they are safe. 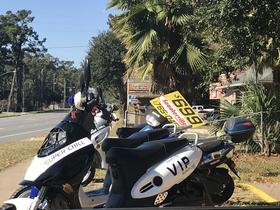 Rayshaun White bought a moped last year because it was less expensive compared to a car and was convenient to use on campus. But in the 12 months he’s been riding he says he’s been in three accidents.

“The first accident was when I first got the scooter," said White. "There was construction on campus and they were building new dorms. There was sand on the road and I was going on a turn and I guess I was going a little bit too fast for the turn. So when I went through the sand there was no traction for my tires and it just slipped from under me.”

According to the most recent data from the Florida Department of Highway Safety and Motor Vehicles, in 2015 there were 10,201 motorcycle, moped, bicycle and scooter accidents. The department does not break them down individually. And those stats hit close to home for White, who got into his third accident on a wet rainy day while running late to an exam:

“And a car slammed on brakes in front of me and on the scooter you can’t slam on brakes or you are gonna flip off of it", said White. “So I tried to slow down pretty fast and go around the car and the scooter lost control cause the ground was so wet. It started flying so I hopped off of it and I ended up falling on the ground pretty hard.”

Sen. Keith Perry, R-Gainesville, says a lot of drivers like Rayshaun, ignore the risk of riding a moped.

“Dress for the slide, not the ride," said Florida State University Police Officer Sheffield. “Doesn’t always look cool it’s not always I was just going down the street. But if you get hit by a car and your head hits the asphalt or if you just simply fall over and it wipes out from underneath you. That’s where a lot of the damage comes from. A lot of the injury comes from. Its traumatic brain injury.”

Scooterville employee, Juan Williams sells about 20 mopeds and motorcycles throughout the week. In addition to selling motorcycles and mopeds, he’s also selling the head gear to go with them and encourages customers to make the extra purchase.

“You have numbers you have different size helmets for instance half size helmets, three quarter helmets, full face helmets, motorcycle helmets, you have goggles, you have face masks, you have chin traps, you have a number of head gear me I recommend covering the whole head", said Williams.

And that brings us to Rayshaun White’s third accident which occurred on the way to a friend’s house:

“Their ground didn’t have a turning lane so I was in the middle of the street waiting for an opportunity to turn left," said White. "And I guess the car got tired waiting behind me and so right when I was about to turn they went around me and ended up hitting my front tire.”

While plenty of protective gear is available for mopeds and motorcycles, many riders- like White, risk their lives rather than wear it.

“I never really wore my helmet, for one it kind of looks crazy.” said White. 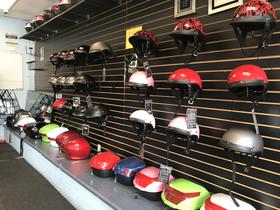 Senator Perry is sponsoring a bill that would change the helmet exemption from 16 to 21. Under the change, drivers over 21 must have an insurance policy for at least $10,000 dollars to ride without a helmet.

That third accident really scared White and a more recent tragedy has made him rethink his transportation options:

“And also later on a guy that worked with me at the Leach ended up passing away in an accident on a scooter,” said White.  “And once that happened I was like yeah I would rather walk or ride the bus then even ride this thing.”

“How did these accidents make you feel after getting involved with them,” asked Taylor Knight.

“I mean the first accident I felt like yes its nothing. Just pay attention when there is sand on the ground,” replied White. “But the third one when someone hit me I felt like it was no fault on my own. I was like yeah the scooter life is a no go for me.”

A state lawmaker wants more young motorcyclists to wear helmets. A state senator is working on removing the exemption for riders under 21.

Concerned about the 53 million cars on U.S. highways with unresolved recalls, the National Safety Council is launching a new website.