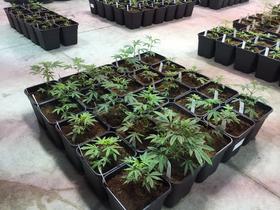 State officials will add 10 new medical cannabis nurseries under legislation approved last week.  One passage gives the orchid grower Sun Bulb a license after it came within one point of winning a permit in 2015.  Another gives preference to applicants that own former citrus facilities.  Sen. Rene Garcia (R-Miami) is one of six in his chamber to oppose the bill, and he isn’t happy about favoring the citrus industry.

“I think it was completely unnecessary,” Garcia says, before allowing, “It’s part of the process, everyone has a right to amend the bill.”

“We’ve known,” he goes on, “this has been out for quite some time, but at the end of the day the voters voted for a bill, a constitutional amendment that didn’t meet their expectations, and that’s why I voted against it.”

The citrus language was a late addition that came after Sen. Wilton Simpson (R-Trilby) entered the negotiations.

Information about investors and partners in medical-marijuana businesses is not a trade secret and should be disclosed under Florida's public-records law, an appeals court ruled Friday.

The Florida Legislature's passage of a bill to enact the state's constitutional amendment expanding the use of medical marijuana has ended one chapter in the battle over setting up regulations for the nascent industry. But pro-pot supporters say it doesn't go far enough.

The Senate and House approved the bill during Friday's final day of the special session. The House passed it 108-9 before the Senate voted 29-6.

Both chambers reached agreement on Wednesday that there would be a cap of 25 dispensaries per medical marijuana treatment center and that there wouldn't be a sales tax. The bill still bans smoking despite amendment supporters saying it is written into the language.

House and Senate leaders might be divided on issues that forced them to return to the Capitol this week, but they're in agreement about marijuana.