Some Hold Out Hope Substance Abuse, Reentry Programs For Inmates Will Get Fully Funded

Some blame the state legislature for not fully funding Florida’s corrections budget. Prison officials say that led to them making some hard choices. Among those choices: cutting funding to programs helpful to inmates trying to transition back into society—as we hear in the last installment of Sascha Cordner’s two-part series.

Over the course of three decades, Leon Evans has been in and out of prison—mostly on charges linked to selling or possessing drugs

“I got so pissed off because things weren’t going my way, life wasn’t taking a right direction,” he said. “So, I started selling drugs to make ends meet because I was a convicted felon, wouldn’t have been hired, wouldn’t have gotten the jobs.”

Then, last year, a few months before his release from Moore Haven correctional facility, he read flier about a re-entry program called Transition House.

“So, I signed up and in my last 90 days, they routed me over here and I got my application approved,” he added. “And, I came straight here from Moore Haven.”

Evans says what really interested him was the Homebuilders program.

Evans also got help applying for a housekeeping job. But, he says he’s working toward an ultimate goal.

“My long term goal is I want to start my own landscaping and pressure cleaning business,” he stated. “You know, give me two trucks, some machines, and some equipment and stuff like that and do subcontracting in a residential development and beautification. That’s my objective.”

And, Evans says he would never have gotten to this point if it wasn’t for the support he got at Transition House. He adds there’s a huge bond between those getting help, their peers, and the counselors.

“You know, it’s a bond here that existing between the clients and stuff,” he continued. “I say that’s amazing because people you don’t even know reach out, they help you, they assist you. You need some bus tickets. You ain’t got no bus pass. You make it happen. You make it work. That’s the main thing. Everybody trying to make it work with each other.”

But, some inmates and former inmates may not get that chance.

Transition House is among several re-entry and substance abuse programs across the state that lost more than a million dollars in funding this year. Florida Department of Corrections officials say they had to do that to make up for a more than $50 million dollar budget shortfall.

Citing rising health care cost, prison officials also said a bulk of the money would go toward providing health care to all inmates, since it’s required by law.

“So, I’d like to reiterate one fact,” said Thomas Griffin, the CEO of Transition House. “The cuts the Department of corrections is facing is not massive. They have a $2.4 billion budget, and what they’re talking about is $30 million for substance abuse and behavioral health treatment at the various different facilities.

“Our facility in Kissimmee is seriously going to be affected by that—you know it’s massive cuts—as well as a re-entry program that we have here at the facility in St. Cloud, which is going to be eliminated,” he added. 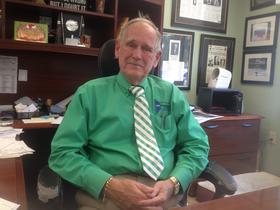 Due to the cuts, many inmates in the middle of their programming—like learning different trades, saving money, and getting drug treatment—had to be bussed back to the prisons.

And, Griffin says moves like that do not help reduce the recidivism rate, or the time it takes for someone released from prison to commit a crime and end up back in prison.

“Many people go back to prison multiples times,” he continued. “And, that becomes a real cost factor in running a prison system. If we can reduce our recidivism rate from 38 percent down to five percent, the state would enjoy a substantial savings. The budget would be severely cut and reduced as well as the number of families that are totally upset and totally torn apart, as a result of this…would be restored to a functioning lifestyle.”

Griffin had hoped the Governor would step in and use money set aside for emergencies. But, Governor Rick Scott did not answer that question, when he was asked by reporters months ago.

Still, he shares Griffin’s worry over how these cuts will affect some of the gains the state has made in crime reduction.

“Absolutely,” said Scott, at the time. The reason why I asked for the money is, if you go through and look at those programs, they worked. We’ve make significant investments in re-entry programs in the state, and it’s worked. If you look at the recidivism rate, the number of people in our prison system, it’s gone down and if you look at the crime rate…The legislature has to fund these programs.”

And, Sen. Jeff Brandes (R-St. Petersburg) agrees. Calling the cuts a disaster, he’d even tried to look into some short-term funding solutions.

“The challenge we’re running into is there’s isn’t a lot to be done,” he said. “I proposed a few different ideas. For example, instead of doing a 12-month contract, do a 10-month contract and then we would backfill the last two months when we go back into session. That would at least get us through the process. OR For those vendors, who are the providers of transition services, to enter into just a six-month contract with them, again, to allow us to get back into a legislative session and be able to have the resources to backfill so that we could continue and you would see no drop in service for those few months. But, I couldn’t get support to do that.”

But, he says this really speaks to a broader set of issues.

“They’re really symptomatic of a deeper problem, which is: can Florida really afford 96,000 inmates?  Can it really afford to keep them? And, if it can’t, what is it going to do about them? The simple truth is we have 108 different mandatory minimums,” said Brandes. “We have an 85-percent rule that is interpreted by different people to mean different things and doesn’t really work for those inmates who have served a decent amount of time, but have been on good behavior, have tried to better themselves, and are going to come out and not recidivate and not get back in trouble with the law.”

During this past legislative session, a number of Brandes’ bills looking to change mandatory minimums, raise felony thresholds, and electronic monitoring, died.

He says what he hopes for is legislative leaders across the state to step up and support some bold criminal justice reform ideas.

“But, I think what you’re seeing is a movement that’s beginning to change in the legislature,” he added. “People recognize that this is a big issue, and many legislators, they see this as the ability for them to really make a difference.”

And, as for Leon Evans, he says things are looking up for him. He’ll be 60-years-old in August. His hope is to get a job, find housing, and continue having the support of his family.

“My grandkids: I have seven grandsons and five granddaughters and three sons,” said Evans. “The relationship there is outstanding. The more I stay in contact, the more I’m able to push all that negative out of my life and stuff like that and keep myself in an objective state to where I can always wake up and say, ‘Lord, make this day better than yesterday,’ you know. That’s what’s incredible.”

Jason Bellows was a Florida inmate on his way out of prison and back into the real world.