Soldiers Distribute Clean Water in Puerto Rico, Where It's Still a Luxury

Many residents are making daily visits to distribution sites, where the Army has set up portable water purification systems.

Water -- especially safe, drinkable water -- is still hard to find in much of Puerto Rico nearly a month and a half after Hurricane Maria tore into the island.

In an isolated pocket of the central mountains, a team of soldiers from Fort Bragg, N.C. is helping meet that need. They've set up a portable water purification system.

"We're just going day by day and giving out as much water as we can give out to whoever wants it and whoever needs it," said Sgt. Gary Wyckoff, who's part of the seven person team in the municipality of Utuado.

Beside a lake surrounded by high limestone cliffs, a droning machine slurps up muddy water and renders it safe to drink. Wyckoff then directs it into an array of three room-sized round storage bags that lie on the ground like giant beached jellyfish. Other soldiers fill containers for a throng of locals who line up carrying 55 gallon drums, two-liter soft drink bottles, milk jugs, and buckets. 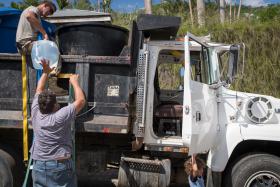 The line of cars and trucks is so long police have to direct the traffic.

"God bless you," yelled Jose Santiago, a rotund retiree, as he rolled up in his red pickup truck, an American flag flying from one side, a Puerto Rican flag from the other. He told his wife, Ramona, to take his photo posing with a soldier in front of an Army water truck.

"That's the Powerball," Santiago said, comparing his container of water to the multimillion dollar lottery prize. "You give me money? Okay, I’ll take it. But you give me water? Aqua primero!"

Water is the most important thing.

This is one of eight water purification sites scattered around Puerto Rico, being run by Army Reserve, National Guard, and active duty Army units. They're filling just a fraction of the need, but that need is intense.

A second team from Fort Bragg has even bigger equipment and 13 tanker trucks to distribute the water on the east end of the island.

And here in Utuado, the soldiers have been making more and more water as word spreads about them - more than 20,000 gallons a day now. Wyckoff said they have requested more of the giant storage bladders so they can start running the purifier almost around the clock to meet the demands of everybody lining up to get water.

"It's everybody from this area, the city of Arecibo and Utuado," Wyckoff said. "They have two other water sites there, but they can't keep up with the need."

Not far behind the jovial Santiago and his red pickup was a dump truck with two plastic tanks in back that can hold 700 gallons. Driving is another beaming retiree, Israel Perez Quilles.

Three times a day, he fills the tanks and drives around his neighborhood of about 80 homes, distributing the water for free. And twice a day, his wife and sometimes a neighbor drive down with breakfast and dinner they cook for the soldiers.

"They treat us like family here, and it's awesome," Wyckoff said. "It feels like we're making a difference."

Utuado had heavy storm damage, with several residents killed and the homes of thousands more damaged. One community that's still cut off by road gets its supplies via a cable strung over a river. 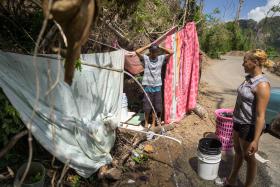 Since the hurricane, most people in the region have been relying on water from streams, which carries dangerous levels of bacteria. Throughout Puerto Rico's mountains, people have rigged up white plastic pipes that carry stream water to makeshift outdoor areas where they can take showers and do laundry.

Not far from the Army water operation, four of the pipes lead to a roadside, where there's a privacy curtain of old blankets strung on wires. Two couples washed clothes as a pair of toddlers played in the water.

"My house was destroyed. The majority of the neighborhood was destroyed," said Paola Bernacett, 19, from the nearby town of Araceibo. "A lot of my family also lost their houses. The houses were built from wood with tin roofs."

She says that she and neighbors come here to do laundry and get water to carry home for cleaning and running toilets. For drinking and cooking water, they go to the soldiers, or sometimes find water somewhere else. They used to drink the mountain water, but they read in a newspaper about the bacteria.

She says it's unclear how long people here will have to piece together their water supply like this.

"From the rumors I've heard in the newspaper, it's going to take a long time," she said.

Removing pythons helps the ecology of the Everglades - and helps veterans transition from the battlefield to civilian life.

A North Carolina-based engineering battalion is making slow progress repairing roads that were blocked or damaged in Hurricane Maria. But months of work lies ahead.

At Puerto Rico’s request, Florida Governor Rick Scott will travel to the devastated island Friday to offer advice about how to speed up efforts to restore the island’s power.

Leaving 'Paradise:' Will Exodus For Florida Hurt Puerto Rico More Than Maria Did?

PATILLAS, Puerto Rico – Jan Carlo Pérez’s family has a farm in Patillas, Puerto Rico. It’s a town of lush green hillside forests known as the Caribbean island’s “emerald of the south.” But right now Patillas – close to where Hurricane Maria made landfall in September – is a struggling disaster casualty.