With two landslide victories under their belts, environmentalists say they are waiting to decide whether to revive a solar ballot initiative in 2018. 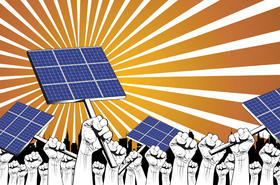 Southern Alliance for Clean Energy’s Stephen Smith says he’s waiting to see if Amendment 1’s crushing defeat on Tuesday brings the utility companies that sponsored it to the negotiating table during the next legislative session.

“Whether the utilities want to work together, or whether they want to continue to play hardball. And I think we’ve demonstrated we can play hardball with the best of them.”

Floridians will get a chance this fall to put solar-energy regulations into the state Constitution.

The Florida Supreme Court, in a 4-3 ruling, found that the wording of a controversial ballot initiative backed by major utilities meets the legal standards to go before voters in November.

A controversial solar-energy ballot initiative fell short short of the 60 percent voter approval it needed Tuesday, concluding for now one of the most-expensive constitutional amendment campaigns in Florida history.

Pro-Solar Groups Across State Urge 'Vote No On Amendment 1'

Opponents of the solar-energy ballot measure known as Amendment 1 held events in a dozen locations across the state Thursday, including in St. Petersburg.

They're urging Floridians to vote no on Tuesday.

Polls are showing that Amendment 1, which supporters say gives Floridians the right to own solar equipment, has seen a rapid decline in support over the past month.

According to a poll conducted by St. Leo University, the amendment had 84 percent support from likely voters in September, and now has 59 percent.