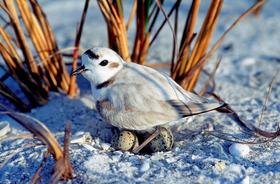 It’s Nesting season for Florida’s waterbirds. And, Florida wildlife officials say it’s important the public keeps its distance, while on the beach or boating on the state’s waterways.

Keeping the beach clean and not feeding wildlife is important to ensuring the safety of shorebirds, seabirds, and wading birds.

“You know, don’t throw the French fries to the laughing gulls or leave scraps or debris on the beach, any kind of litter, it’s hazardous to wildlife,” said Nancy Douglass, a biologist with the Florida Fish and Wildlife Conservation Commission. “But, the food is also problematic because it attracts predators to the beach, things like raccoons, gulls, and crows, and then, they’ll eat the eggs and young as well.”

Other tips include not chasing the birds, forcing them to run or fly. Douglass says not only can it cause some birds to abandon their nests—leaving the eggs vulnerable—but it can also make the birds, resting from a long migration, expend energy they don’t have.

She says while it’s a sensitive issue, FWC officials would also prefer people not bring their pets to the beach because even the most docile dog—for example—may be considered a threat and spook the birds.

“These birds are very, very sensitive to four-legged predators, and they don’t distinguish between say, a fox, a coyote, a raccoon, and a domestic dog,” Douglass added. “So, when we bring our dogs to the beach—even if they’re well-behaved and on a leash—they are very disruptive to these birds.”

She says if someone has to bring their dog to the beach, they’d prefer it if it’s a designated dog beach.

Officials also urge people to politely tell others if they are disturbing nesting birds. But, if the disturbance continues, the FWC should be contacted.

As residents and visitors flock to Florida beaches over the long Fourth of July holiday weekend, wildlife officials and advocates are urging beachgoers to be mindful of nesting shorebird colonies and sea turtles.

Florida wildlife authorities approved new protected areas Wednesday for some of the state’s most iconic and imperiled bird species.

Florida’s Goliath Grouper Is As Big As A Grizzly Bear. And Officials Say It’s Still Off Limits.

There will be no harvesting of Goliath Grouper in Florida, for now.

New Protected Areas Would Be Aimed At Nesting Florida Birds

Florida wildlife authorities may expand protected areas for some of the state’s most iconic and imperiled bird species like roseate spoonbills and brown pelicans.