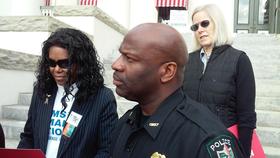 Last May 23rd, six people were killed and 14 injured when 22-year-old Elliot Oliver Robinson shot up a crowded street adjacent to the Santa Barbara campus of the University of California. Robinson, who was mentally ill, took his own life.

One of the dead was 20-year-old Christopher Ross Micahels-Martinez. His father was filled with indignation Monday as he climbed the steps of the Old Capitol to protes a so-called “guns on campus” bill.

“I can’t accept that my son died in this way, it was a preventable and senseless death.”

Martinez, a 61-year-old criminal defense attorney, has been on a crusade ever since. Prevention and some grass-roots lobbying drove him to Tallahassee during the second week of the legislative session. No one can convince him that more guns are the answer to spree killings.

“It’s just a fantasy to think that a civilian is going to respond as effectively as a trained law enforcement person in these kinds of situations. And it actually makes the job of the law enforcement more difficult.”

Senate Bill 176 by Greg Evers, a Republican from Baker, bans colleges and universities from prohibiting concealed weapons on campus. If the bill passes, Florida would join 9 other states with similar laws.

It’s a common argument that guns don’t mix well on campuses where alcohol, drugs and depression are rampant. And Florida A&M Police Chief Terence Calloway, who joined the protest, has another concern.

“I’m worried about an environment where there’s constant suspicion. You don’t know who has a gun, whether that person has been properly trained to handle a gun, or whether a person can be trusted with a gun.”

Supporters of the legislation are sympathetic to the survivors, but see them in a different light. He says each death is a reason to allow potential victims to defend themselves.

Campus gun bans are useless because enforcement is so lax, he says.

“Guns are already there. The bad guys have them, the good guys should have them there, too.”

If gun opponents don’t believe in the deterrent effect of concealed weapons, all they have to do is ask the criminals, Friday says. In FBI surveys of prison inmates, one reason for avoiding potential targets rises to the top, Friday says.

“It’s not police officers, it’s not the eventual punishment or being caught, it’s coming across an armed victim because those armed victims fight back.”

Evers’ opponents have their work cut out for them. Evers’s bill passed his Criminal Justice Committee 3-2 last month.

Authorities say three students were shot during an altercation at Bethune-Cookman University in Daytona Beach, and law enforcement are still looking for two suspects.

The students were taken to hospitals after the Monday night shooting.

Two men were taken into police custody after the shooting, but were released after questioning. Police say the search for the shooters is continuing.

Despite broad opposition on Florida’s campuses, state lawmakers are moving forward with a plan to allow guns at universities.  Three months ago today, there was a shooting at Florida State University, and this week the controversial measure began its path through the Senate.

A controversial measure to allow concealed weapons on university campuses passed on a close party-line vote in a senate committee Monday.

Concealed carry licenses in Florida are limited.  Places like bars, courtrooms—even career centers are set aside as gun-free zones.  But Sen. Greg Evers (R-Baker) is taking aim at a different area: public universities.

Evers invited Rep. Greg Steube (R-Sarasota) to introduce the bill, and during his presentation Evers holds up a sheet of paper for Steube to see.

A joint statement from the university system's Board of Governors, university police chiefs and the 12 public universities expresses opposition to a legislative proposal (SB 176 and HB 4005) that would allow people with concealed-firearms licenses to carry guns at state colleges and universities.

A House subcommittee has approved a bill that would allow guns on college campuses in Florida.

If legislators pass the bill during the upcoming session, it will repeal a state law that prevents concealed-carry permit holders from bringing their guns on college campuses and universities around Florida.

Marjorie Sanfilippo, a psychology professor at Eckerd College, testified before the House Criminal Justice Subcommittee. She believes the rates of psychological disorders in college-age students may lead to trouble for students who have access to concealed weapons.