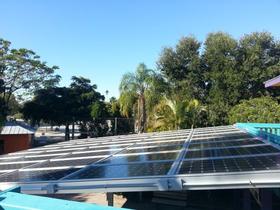 Perhaps nothing proved solar power’s popularity better than Amendment 4. More than 73 percent of voters thought it would be a good idea to lift taxes on solar and other renewable energy devices.

Brandes is hoping the mandate will speed passage of the implementing bill. Southern Alliance for Clean Energy’s Stephen Smith says Martin and Hendry counties may ask for exemptions for existing solar projects.

“Because they may have already worked some of those projections into their budgeting, so that may be worthy of some consideration. But I think those are really the exception and they are really few and far between.”

Smith says advocates are happy, however, that the bill appears to be clean of any favors for solar energy opponents.

Florida voters recently rejected Amendment 1, which would have restricted the reselling of energy produced by solar panels to electric companies - a process known as net metering. But despite being one of the nation's sunniest states, Florida lags behind other states when it comes to solar capacity.

According to a new report by the environmental advocacy organization Environment Florida, Florida ranks third in the nation for the number of potential solar panels, but is 16th in energy derived from the sun.

The Florida Supreme Court on Friday dismissed a pair of legal moves aimed at striking down a solar-energy ballot initiative backed by major utilities.

In terse, single-line statements, justices dismissed as "moot" requests by the Florida Solar Energy Industries Association and the group Floridians for Solar Choice to reconsider the court's approval of ballot language for the initiative known as Amendment 1.

Pro-Solar Groups Across State Urge 'Vote No On Amendment 1'

Opponents of the solar-energy ballot measure known as Amendment 1 held events in a dozen locations across the state Thursday, including in St. Petersburg.

They're urging Floridians to vote no on Tuesday.

Several amendments to the state constitution will be on the ballot on election day, including one that would regulate solar energy. The wording of Amendment 1 has created some confusion, so WUSF's Steve Newborn shines a little light on that with PolitiFact Florida's Josh Gillin.