The measure would pump $20 million into environmental projects in an area known as the home of the only tropical reefs in the continental United States. 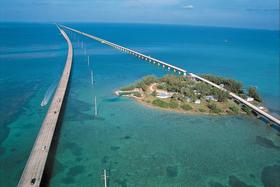 Republican Anitere Flores of Miami says the investment will more than pay for itself.

“The Florida Keys is a huge economic driver for the entire state of Florida. It is incumbent on the state to invest to insure that the environment, that the natural resources that are important to the Keys are preserved.”

Republican Thad Altman of Melbourne tried to add an amendment limiting a portion of the spending to canal dredging, but agreed to back down.

In The Keys, Medical Airlift Can Be Cost-Free — Or Not

She lives in Key West,  so she went to the emergency room at the only hospital within 50 miles. But because her leg needed specialized care, she had to get to a hospital on the mainland.

That leaves you the option of being airlifted out.   And that can cost you nothing -- or tens of thousands of dollars.

But Monroe County is trying to make sure patients have the chance to choose that first financial option.

The lead scientist on a study that surveyed the health of Caribbean coral reefs over 50 years says climate change is not the most severe threat facing coral reefs.

The Florida Keys reef is among the unhealthiest reefs in the Caribbean, said Jeremy Jackson, who grew up in South Florida and first visited the Keys in the late 1940s.