Florida Sen. Jack Latvala says he’s not ready to give up politics after he’s term limited in the Senate next year. But he won’t say what he’s eyeing next. Latvala spoke at the Tiger Bay Club in Tallahassee.

Senate Appropriations Chairman Jack Latvala said if he could be elected to the House for life, he’d turn it down. Latvala calls the House’s budget priorities this session discouraging. The Clearwater Republican supports Gov. Rick Scott’s fight with the House to keep funding tourism and business incentives. Latvala said he was one of the lawmakers who set up Enterprise Florida. 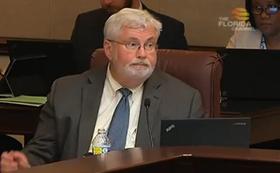 “We took a state agency with state bureaucrats and we replaced it with a business-government partnership to work on bringing the kind of companies in that would provide high-wage, skilled jobs for the future,” he said.

But Rep. Paul Renner, who’s sponsoring a bill to kill the agency, said Enterprise Florida favors big companies and most of them don’t live up to their end of the bargain after getting the incentive money.

“For every success story, there’s a horror story right behind it," he said. "We know that the vast majority of the applicants that begin the process of receiving these incentives never complete them.”

Latvala said there’s likely a deal to be made to get the higher education funding if the Senate is willing to embrace schools of hope, which is a bill being pushed in the House by his son Chris.

“The price is going to be something that a lot of you aren’t going to like," he said. "And that is, in order to that through the House of Representatives, the funding and the whole structure, it’s going to require us eating some dinner that they’ve made for us that doesn’t taste real good on charter schools and K-through-12.”

Latvala said too much session time has been eaten up by fighting over economic development and limiting home rule. Latvala refers to one measure that deregulates vacation rentals.

“The folks in the House of Representatives primarily, who think they’re smarter than anybody elected at the local level," he said. "Whether it’s city commission or county commission, they think they know more than anybody else who’s elected by the same people on the same ballot than they are.”

Latvala blames term limits for stripping legislators of their independence, although he said he voted for them. Florida approved term limits as a Constitutional amendment in 1992. Latvala said term limits give the Senate president and House speaker much more power.

Democratic Rep. Loranne Ausley said Latvala is right about term limits increasing the power of the top leaders. She said it’s not Democrats who Republicans must compromise with.

“That’s very clear on both sides and certainly on the House side," she said. "The speaker’s really driving the train. And it’s not really Democrats versus Republicans, it’s at this point, the battles are within the Republican party.”

Latvala said if the House and Senate begin conferencing on a budget compromise at the start of next week, that’s be a promising sign that session will end on time.

Since his return to the state Senate five years ago, Jack Latvala hasn't shied away from controversy.

At times, the old-school Republican politician has been a thorn in the side of leaders in both chambers, and he hasn't exactly let Gov. Rick Scott off the hook, either.

In 2012, for example, Latvala was instrumental in killing a priority of Scott and top GOP lawmakers that would have privatized more than two-thirds of the state's prisons. The following year, he played a major role in blocking a pension overhaul sought by then-House Speaker Will Weatherford.