Florida lawmakers are on track to vote on the budget Monday. That makes Friday the last chance for them to get the remaining bills passed. Here's a rundown of some of the Senate’s 11th hour deliberations. 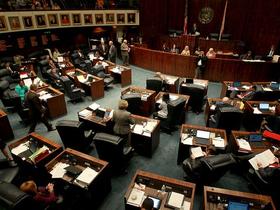 With the end of session looming, horse trading is pretty typical. That can make for some gut-wrenching decisions. One of those bills combines an expanded scholarship for people with disabilities, with an expanded voucher program that uses state money for private and religious schools. Tampa Republican Senator Dana Young is backing the tax credit scholarship program, which primarily goes to low income and minority students.

“This bill doesn’t increase the cap on these scholarships at all. All it does is it increases the amount of money per child for middle school and high school,” Young said.

The bill was especially challenging for Democrats, who see school choice as a threat to traditional public schools. Ultimately the Senate approved the bill 27 to 11.

Another contested bill is a fix to the state’s worker’s compensation program, which was recently found unconstitutional. Lawmakers want to stabilize rates that are on the rise since the ruling. Fleming Island Republican Senator Rob Bradley hoped to strike a compromise with the House.

“Among other things it makes the rate making process more transparent so that businesses are gonna get a better…hopefully lower rates,” Farmer said.

The change sets the chambers up for another round of disagreements, which means workers comp reform is likely dead for this year.

There was also a lively debate over public school textbooks. Lawmakers want residents to be able to object to books they find inappropriate, not just parents. But Lake Worth Democratic Senator Jeff Clemens worries the bill opens the door to…

“Potentially allowing parents to advocate with their schools boards that we should remove language about sexual education, about important events in history, about science!” Clemens said.

Supporters of the bill want to beef up the review process and allow more community control. The Senate ultimately voted 19 to 17 to do just that.

But many of these last minute measures are relatively uncontroversial, allowing the chamber to rattle through page after page of parliamentary procedure. The experience is not unlike an auction.

The Senate also voted to print addiction advisory warnings on lottery tickets, similar to those on alcohol and cigarettes. Republican Senator Keith Perry of Gainesville is sponsoring the bill.

The measure is now headed to the governor’s desk.

“This bill allows for an absentee ballot voter or a vote by mail voter to turn in their ballots at an early voting location in their co of residence as well as during the times that the voting sites are open,” Powell said.

But not every bill made it through. Put on hold is a plan to let utility companies recoup costs when they invest fracking.  Lawmakers also sidelined direct primary care agreements, which would let patients pay doctors directly for a limited array of services, instead of through insurance companies.

The Florida Legislature has lined up a series of spending measures to complete the state budget.  Leaders are cramming some of the largest and thorniest issues into measures that some lawmakers will be debating for the first time.

Can Lawmakers Adjourn On Time? Clock Winds Down On 2017 Session

Can Florida Lawmakers leave Tallahassee on time? The mood in the state capital has gone from one of pessimism, to cautious optimism that leaders can strike key deals in time.

House Speaker Richard Corcoran says changes to the Senate’s plan to buy land south of Lake Okeechobee make the proposal better, but he’s refusing to cave on one big issue: whether to borrow money to finance the system.