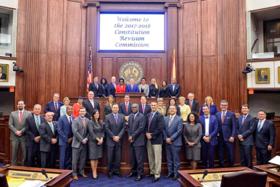 Bradley serves as Senate Appropriations Chair. He says some of the amendments put before voters earlier this month were, in his words, “improperly bundled.” Including one he says isn’t good for his constituents in District 5.

“Amendment 10 had language that was universally popular about veterans and first responders – and they bundled that with some significant changes to charter governments, locally. And those changes, I think, have a detrimental effect on Clay County.”

It’s for that reason Bradley recently filed a bill that would stop the Constitution Revision Commission from combining amendments.

Bradley says he’s already seen a good amount of bipartisan support for the idea. The Constitution Revision Commission convenes every 20 years. It will next meet in 2037.

Three proposals on the November ballot that would make tax-related changes to the state Constitution have drawn conflicting views from the real-estate industry, local governments and other groups about the measures’ potential economic impacts.

A Guide To The Constitutional Amendments On Florida's 2018 Ballot

The 2018 General Election ballot will feature 12 constitutional amendments after the Florida Supreme Court struck Amendment 8 from the ballot in September.

Below is a breakdown of all of the proposed constitutional amendments and local referendums, from our partner station WUFT in Gainesville.

South Florida voters will need to do some homework before heading to the ballot box in the upcoming November general election. Some voters may have more than one page of items and races to vote on. That includes 12 amendment items to be considered for inclusion in the state constitution.

Some of those amendments are actually more than one item that had to be bundled together as to not have too many items on the ballot. A couple of those are being challenged in court.

Why Are So Many Election Ballots Confusing?

Quesenbery has been assessing ballot design for nearly two decades. Los Angeles County's is one of the best she has seen.

"Look at those instructions," she says, admiring the ballot's simple wording and standout color. "They're beautiful."