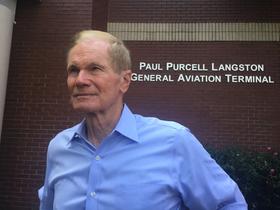 Democratic Senator Bill Nelson says fears that Panama City’s Tyndall Air Force base might shut down are “unfounded” after Hurricane Michael brought destruction to its hangars.

Nelson says the base’s 11,000 personnel and most of its aircraft were evacuated prior to Hurricane Michael’s landfall. But hangars sustained heavy damage, and some aircraft that remained during the storm are still being evaluated. Still, Nelson says the base won’t be closing down.

“As a senior member of the Senate Armed Services Committee, I can say that Tyndall will be rebuilt. And it will be an example of a modern U.S. Air Force base,” Nelson told reporters in Tallahassee before flying to several Panhandle counties Monday.

Nelson says Tyndall is “critically located” next to the Air Force’s Eastern Gulf Testing and Training Range in the Gulf of Mexico – the U.S. military’s largest. He calls the training range “one of our greatest National assets.”

Nelson is headed to emergency operations centers in Blountstown and Apalachicola to evaluate need in rural North Florida. Nelson says beyond problems facing devastated areas like Panama City and Mexico Beach, rural counties are set for an uphill battle with recovery.

“For the small rural counties – these are poor counties,” Nelson said. “They don’t have the money to pay for debris pickup. And that’s going to be increasingly a problem.”

Nelson also anticipates a housing shortage as those in unlivable homes look to find a place to stay.

Asked about the political conversation surrounding hurricane recovery, Nelson said “Now is not a time for politics.”

On Thursday, Amber Gee evacuated her Callaway, Fla., home a day after Hurricane Michael made landfall. Callaway is just east of Panama City on the Florida Panhandle — an area that has been devastated by the storm and an area where many of Gee's family members also live.

On Saturday, Gee was on Facebook where she found a link to a NOAA interactive aerial map that could give her an idea of the damage. Gee began to look at aerial images of the destruction, when she made a serendipitous discovery.

After Hurricane Michael slammed through the Florida panhandle and into Georgia last week, President Trump has surveyed damage and met with officials about recovery efforts.

At a briefing alongside Florida Gov. Rick Scott at Eglin Air Force Base, Trump praised the work of emergency responders and law enforcement.

"The job they've done in Florida has been incredible," he said, and described Scott as a leader who "steps up in the biggest emergencies, the biggest problems, and he gets it done."