As Russia And China Grow Their Militaries, Army Trains For New Fronts

Under the Trump administration, the military is shifting its strategy back towards more traditional warfare.

Since 9/11, American troops have been focused much of their training on the fight against insurgent groups in the Middle East. But now, the military is preparing for the possibility of war with nations that have bigger, more sophisticated armed forces.

The wars in Iraq and Afghanistan were fought in a very specific way: typically by small groups of soldiers in cities and on mountain passes. 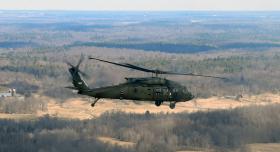 Fighting there meant "doing a lot of foot patrols," said John Amble with the Modern War Institute at West Point, who served in Iraq and Afghanistan. "Going out and walking and kind of looking for the bad guys, so to speak."

The fight against insurgent groups isn't over. But under the Trump administration, the military is shifting its strategy back towards more traditional warfare.

"It's a movement to what they call great power competition," said Abby Doll, a policy analyst at the RAND Corporation.

And it's the result of a long trend: while the United States has been at war, Russia and China have been beefing up their militaries.

"They've been watching us operate, and they've worked to develop technologies and ways of operating that can erode our overmatch that we enjoyed in multiple domains, so that's land air, sea, and more recently, cyber and space," Doll said.

The Russian and Chinese militaries can now engage in electronic warfare, and they have surface-to-air missiles, she said.

"There's also long range rockets, artillery, and missiles that are a threat not only because they can reach back into places we normally thought were sanctuaries from the adversary, but because they also come in a much higher volume that they can bring to bear," Doll said.

Training to fight a threat like that, Amble said, requires a different approach: more focus on aerial warfare and electronic weapons systems.

"You're talking about increased scale and distance and speed. And that all means to train for it, you need a lot more space."

Army pilots from the 10th Mountain Division took their training off base recently to get that sense of scale. They spent ten days flying and fighting their way from Vermont through the Adirondack Mountains in northern New York, evading simulated threats. 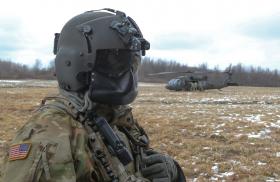 One bright morning at the start of the exercise, community leaders and journalists gathered in a big airplane hangar on base for a demonstration of what soldiers are practicing. Col. Clair Gill explained the flying technique soldiers are working on: it's called nap of the earth, and it means using topography to your advantage.

As part of the demonstration, soliders did two flyovers to show everyone the new technique they're practicing.

The first time, spectators could see the helicopters approaching. They're high up and easy to spot, and that makes them vulnerable.

"I would imagine a well-trained air defender could probably shoot that helicopter down," Gill said, looking up at the sky.

The helicopters then came back again. This time, people on the ground could hear them, but only see them for a flash before they disappeared around a grove of trees.

There are limitations to this type of training: Only some simulated weapons systems can be used off-base. Flying over the Adirondacks is just an approximation of what the Army might encounter in Russia or China. And, of course, there's no enemy shooting at the soliders and the helicopters. But Army officials say it's a necessary start so soldiers can be prepared for what's to come.

'Why Him And Not Me?' Songwriting To Mend The Wounds Of War

For her new album, Nashville singer-songwriter Mary Gauthier collaborated with veterans to write songs about war, service, and life after the military.

The VA is now mailing identification cards to veterans who want tangible proof that they served in the military. But after waiting almost three years for the new government-issued I.D., some veterans are not happy that the card contains an advertisement.

As the Senate considers Robert Wilkie's nomination for VA secretary, veterans groups worry that the agency's leadership gap has slowed its work.