Rubio Leads US Senate Race, According to New Quinnipiac Poll

Marco Rubio has a 7 point lead in the race for Florida’s U-S Senate seat, according to a new Quinnipiac University poll. 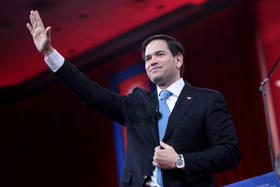 Marco Rubio is outpacing Democratic Congressman Patrick Murphy, 50% to 43%. According to the poll, Floridians are voting primarily along demographic and party lines. But Quinnipiac pollster Peter Brown says Rubio’s lead is built on his popularity with independent voters.

“He has a 16 point lead with independents, which is an unusually large amount. And both candidates are getting about the same level of support from their respective party bases, so the independent numbers are quite telling in this race,” he said.

Just before Florida’s primary last month, Rubio said even he does win re-election, he cannot commit to a full 6 year term.

PolitiFact Fl. Checks Out Rubio's Voting Record; And Getting An Experimental Drug

There were lots of times during the recent presidential debates where Marco Rubio was taken to task for missing more than his share of votes in the Senate. But does he have the worst voting record of any Florida senator in half a century? WUSF's Steve Newborn looks into that and a claim that Rubio helped a woman get an experimental drug, with Josh Gillin of PolitiFact Florida.

Marco Rubio Faces Patrick Murphy for US Senate in November

Senator Marco Rubio supporters celebrated the incumbent’s victory in the G-O-P primary race for his current seat. During a watch party tonight in Kissimmee Rubio thanked voters for getting his one step closer to a return to Washington.

Longtime supporter Carlos Cabrera said Rubio is the only candidate for the seat.

“He is very important in the Senate because if we lose the Senate, the country is going to be controlled by Supreme Court justices that are going to issue laws of their own for a generation,” said Cabrera.