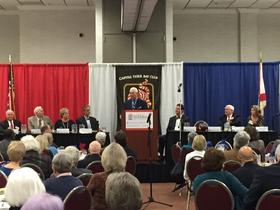 Roger Stone spoke at a Capital Tiger Bay Club event on Wednesday. Stone may be known as a former lobbyist for Donald Trump and as a political strategist for the Nixon, Reagan, and Bush campaigns. But, what Roger Stone is famous for, is his candor at each position.

This has made him a controversial political consultant, something he did not hide on his visit to Tallahassee. He touched upon Hillary Clinton’s loss in the 2016 election, but focused mainly on Donald Trump’s presidency, which he admitted he did not expect.

“I must tell you though that even I find his election victory improbable. In the sense that virtually everything that I’d learned in American politics over a 40 career, all the rules, all of the standard things that we think, appeared to be out the window,” Stone said.

During his time as a lobbyist for Trump, Stone said he urged the celebrity real estate tycoon to run for office on three separate occasions. 1988, 2000, and 2012.

“Here’s a man who got nominated in the Republican primary and convention process without ever spending a nickel on a single poll. Here is someone who spent no money on focus groups, on analytics, on any instrument to tell him what to say in order to appeal to the American people,” Stone said.

Stone worked on Donald Trump’s campaign back in 2015, but was eventually fired. Stone claimed he quit. However, that has not affected his support of the president. He charged the accusations of Russian collusion were a distraction made by Clinton’s political consultant John Podesta.

“There is no evidence of Russian collusion. That being conspiracy, coordination, collusion with the Russian state to affect the outcome of the elections, but I have to give Mr. Podesta some credit for brilliance. No what better way to distract from the fact that you and your brother got $38 million dollars from oligarchs around Vladimir Putin than saying ‘Oh! Look over there at Donald Trump,’” Stone said.

Transparency from both sides is what Stone said he ultimately wants.

“Censorship is a bad idea. I don’t care if you are the most liberal Democrat, or most conservative Republican, or a member of the green libertarian, or vegetarian, party. You should have the same rights as everyone else. To be heard. And to read and see what you want. Censorship is the greatest danger to our democracy. Not Roger Stone speaking to the BBC," Stone said.

While in Tallahassee, Stone said he will be meeting with House Speaker Richard Corcoran, but that it will be strictly personal.