Report: If Lawmakers Don't Do Anything, Fla. Prison Population Will Increase 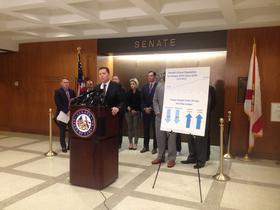 If Florida lawmakers don’t do anything policy wise soon, the state’s prison population could increase. That’s according to a report commissioned by the Florida Senate to promote the need for prison reform.

The report is called “Data-Driven Solutions to Improve Florida’s Criminal Justice System.” Len Engel is the Director of Policy and Campaigns with the Crime and Justice Institute.

“Last Spring, the Crime and Justice Institute worked on a project managed by OPPAGA that analyzed criminal justice data from the DOC and the court system,” said Engel. “In that analysis, we found that the prisoner population in Florida had grown exponentially in the last 40 years—373 percent since the late 1970s, finally leveling off in 2010 at about 102,000 people incarcerated.”

The Institute’s report found Florida’s prisoner population has fluctuated around the 100,000 mark, during the past decade.

In the last couple years, the state's prison population has been on the decline. As of last year, more than 96-thousand people were in Florida’s prisons.

Engel says the recent decline can be attributed to the reduction in low-level offenders going to prison as well as the Florida Department of Corrections putting procedures in place to assist those on probation.

Still, Engel says even with the drop, two factors have largely offset those efforts.

“First is lengths of sentence, and the second is the amount of time people serve on these sentences,” he added. “So, if most states experienced similar declines in their admitted population—the number of people coming into the prison—you’d see much more significant reductions in the overall prison population. But, you haven’t in Florida because sentence lengths have increased by 22 percent and the amount of time served on those sentences have also increased.”

Now, the Institute is proposing several recommendations for Florida’s prisons using data from other states with similar issues.

“The research shows us a handful of fairly clear findings,” he continued. “1) Sending low-level offenders to prison is more likely to increase their criminal behavior. 2) Longer prison term, especially for non-violent offenders, do not reduce recidivism more than shorter terms of incarceration. 3) Treatment programs delivered in the community are more effective than treatment programs delivered in prison.”

Sen. Jeff Brandes (R-St. Petersburg) had asked for the study to be commissioned. He says he’s already come away with ideas from the recommendations.

Yet, Brandes says some proposals could take some time.

A new report paid for and released by the Florida Senate finds that while the state is sending fewer people to prison than in the past, those who end up behind bars are staying there for a longer time.

The study from the Crime and Justice Institute based in Boston says there are nearly 100,000 inmates housed in Florida prisons, and the per capita incarceration rate in the state is more than 20 percent higher than the national average.

Florida lawmakers are working on a measure they hope will help the children of incarcerated parents move forward faster. Fort Lauderdale Democratic Representative Patricia Williams has a bill she says would help to map out a plan for parents and their children.

Should inmates be criminally charged when cell phones are found on their person? In Florida prisons, that can occur. But, in county jails, not so much. During a recent legislative debate, lawmakers discussed a bill making it illegal for local jail inmates to have cell phones within the facilities.

Florida's Prison Population Appears To Be On Decline

Florida’s prison population appears to be on the decline.