Florida high school seniors continue to struggle in math and reading, according to the latest report from the National Assessment of Education Progress, or NAEP.

NAEP is often referred to as the nation’s report card and the latest report shows high schoolers across the nation are doing no better today than they did four years ago. The same goes for Florida, which was one of 13 states where 12th grade students took NAEP’s reading and math tests. It’s a trend experts say is problematic. The cause of the stagnation is unknown, but during a webcast on the issue  an education analyst who helped write the national common core standards, ventured a guess: 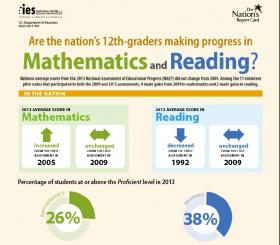 “Are we asking students to read more challenging texts? Are we asking them to read a coherent selection of texts so they learn from the text," Asked Susan Pimentel, founding partner of the nonprofit Student Achievement Partners. " Are students being asked to explain and talk about the texts they’re reading in class, because if the students say they’re not, and they’re scoring a lot lower, I would want to make sure my own school—something would be changing here.”

NAEP Board member Dale Nowlin says it’s important to look and whether students are engaged in the classroom, and the difficulty of what they’re being taught.

According to the report card, students who took more advanced classes did better than those who didn’t and students who said they liked reading did better than those who do not. Nineteen percent of Florida 12th graders were proficient in math compared to 26 percent nationwide.  Some 36 percent of Florida students were proficient in reading compared to 38 percent nationally.  The disparity in scores between white and minority students in Florida also did not change, but the achievement gap is smaller than the national average.