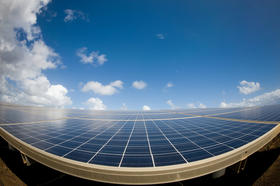 A bill that would amend the state’s constitution to give tax breaks to people who install renewable energy devices on their properties passed its first committee Tuesday with no complaints and no debate. The bill is sponsored by St. Petersburg Republican Senator Jeff Brandes

“Occasionally a proposal comes along that both the Baptists and the Bootleggers can agree on and this just happens to be one of those proposals,” Brandes says.

Brandes’s measure comes as two citizen initiatives dealing with solar energy are fighting to get on the ballot. They deal with who is allowed to sell solar power. Any constitutional amendment must get approval from 60-percent of voters in a referendum.

The Florida Supreme Court on Thursday approved a proposed ballot initiative that seeks to expand the use of solar energy, moving the state one step closer to a fierce political battle next year.

In a battle involving two solar-energy ballot initiatives, a political committee backed by major utilities collected $335,000 in August --- and had raised $798,000 in less than two months, according to a newly filed finance report.

The group, known as Consumers for Smart Solar, also had nearly $400,000 in the bank as September began.

Meanwhile, rival group Floridians for Solar Choice, which awaits a state Supreme Court decision on its proposed ballot language, appeared to be living almost paycheck-to-paycheck based on a financial report filed Thursday.

It is planned to be 25 megawatts, with the capacity to power more than 3,500 homes. It would include more than 70,000 solar panels on 125 acres of company-owned land at the Big Bend Power Station in Apollo Beach.

Company officials say it should be completed in 2016.