Remembering A Near Disaster: U.S. Accidentally Drops Nuclear Bombs On Itself And Its Allies

Listen
Listening...
/
Jay Price reports on a series of accidents with nuclear bombs in the 1950s and 1960s.

This year marks the 50th anniversary of a decision that ended a perilous chapter of the Cold War.

In 1968, the Pentagon halted a program that kept military bombers in the air, loaded with nuclear weapons to deter a Soviet attack.

The problem was the jets kept having near-catastrophic accidents. 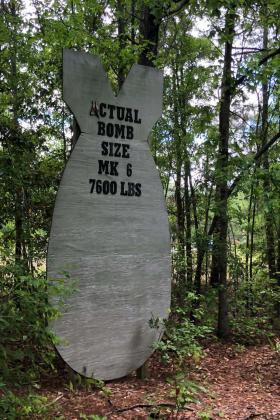 "If you go through some of the archival evidence publicly available, it seems like once a week or so, there was some kind of significant noteworthy accident that was being reported to the Department of Defense or the Atomic Energy Commission or members of Congress," said Stephen Schwartz, a long-time nuclear weapons analyst.

Schwartz singled out 1958 as a particularly notorious year.

Every couple of weeks, Maurice Sanders gets a reminder of one of those 1958 accidents when a car with out-of-state tags parks in front of his house just outside Florence, S.C. Strangers pile out and tromp around to the scrub oak forest just behind his back yard to gaze down at an odd tourist attraction.

"It's the hole from where the bomb had dropped, years ago," Sanders said. "I think it's on some kind of map or something."

The circular pit is as big around as a small house, with a pond of tea-colored water at the bottom. A fading plywood cutout that someone put up − apparently to lure more tourists − is the size and shape of the Mark 6 nuclear bomb that was dropped there by accident.

The core containing the nuclear material was stored separately on the B-47 bomber it fell from, but the high explosives that were used to trigger the nuclear reaction exploded on impact, digging the crater estimated at 35 feet deep. The blast injured six members of a nearby family and damaged their home beyond repair.

Earlier that same year, just one state farther south, a jet fighter collided with a bomber during a training exercise, and the crew jettisoned a bomb into coastal waters near Savannah, Ga.

Two years later, in 1961, a B-52 bomber flying out of Seymour Johnson Air Force Base near Goldsboro, N.C. came apart in the sky, and the two armed nuclear bombs it was carrying fell into a farming community northeast of the base. One buried itself so deeply into a tobacco field that some of its parts were never found. The other floated down on a parachute, planting its nose in the ground beside a tree.

The parachute bomb came startlingly close to detonating. A secret government document said three of its four safety mechanisms failed, and only a simple electrical switch prevented catastrophe. It was 260 times more powerful than the bomb dropped on Hiroshima and could have instantly killed thousands of people. The radioactive fallout could have endangered millions more as far north as New York City.

Safety takes back seat to readiness

The military's name for serious nuclear weapons mishaps is "broken arrow." The Pentagon has officially acknowledged only 32 broken arrows, but evidence compiled by the government shows there were thousands more accidents involving nuclear weapons, Schwartz said.

"Most of which were not as serious as the 32 we know about, but some of them were quite bad," he said.

Schwartz said a wave of serious accidents in the late 1950s through 1968 was partly due to programs that kept the U.S. on a war footing. A few planes were kept aloft 24 hours a day, ready to drop bombs on the Soviet Union.

And then there was the sheer number of weapons being made, which created more opportunities for things to go wrong. 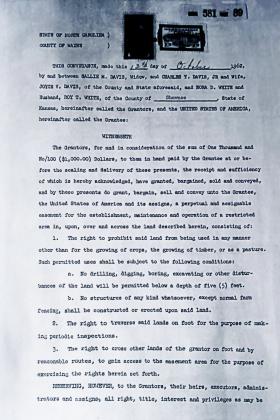 Schwartz said by the year after the bomb fell on South Carolina, the U.S. was making almost 20 nuclear weapons a day.

To understand why the Air Force was routinely flying nuclear weapons around, you have to consider the national mindset of the time, he said.

"We had convinced ourselves that the Soviet Union was going to attack us at any moment, so we increased our operational readiness, and we sacrificed the safety not only of the general public, but the people working with these nuclear weapons," Schwartz said.

The causes of individual accidents were sometimes almost silly. The one in South Carolina, for example, echoes perhaps the most famous movie nuclear weapon scene, when a crewmember of a bomber in "Dr. Strangelove" fiddles with the release mechanism of a bomb, then gleefully rides it down to its target.

While the scene is easy to dismiss as fiction, the South Carolina accident occurred when a crewman accidentally hit a release switch and started to fall out of the aircraft with the bomb. Only by grabbing a handhold at the last instant did he save himself.

Another of the accidents occurred after a crewman put seat cushions on a hot-air vent. They started a fire, and the crew had to bail out.

"Everything associated with nuclear weapons -- the nuclear weapons delivery system, the command-and-control systems that make sure they go off when they're supposed to and most importantly that they don't go off when they're not supposed to − all of these things are designed, built, operated, and maintained by human beings," Schwartz said. "And human beings are fallible."

It wasn't the bombs the U.S. dropped on itself that finally ended the program. Rather, it was two accidents over friendly nations.

In 1966, a B-52 bomber broke apart in the sky near the coast of Spain. One of its bombs dropped into the sea, and three fell on land where conventional explosives scattered radioactive material.

Then, in 1968, the burning-seat-cushion crash spread plutonium and uranium onto sea ice and into the sea off the coast of Greenland.

"It was immediately after that accident that the Secretary of Defense Robert McNamara canceled the airborne alert program," Schwartz said. "He'd seen enough and he decided the risks were just too great -- both the risk of an actual accident, but also the negative publicity."

The decision was made easier by the Pentagon's growing reliance on nuclear-armed missiles launched from land or submarines.

So the program officially ended in 1968, and with it a bizarre era of potential catastrophe averted.

"Of course, no nuclear weapons accident actually resulted in the actual detonation of a nuclear warhead or bomb, and for that we can be grateful to our engineers who designed these weapons and built in a number of safety systems," Schwartz said.

"But we also have to give a lot of credit to just plain old dumb luck."

In L.A., Homeless Vets Now Can Sleep In Their Cars At The VA

In the first program of its kind in the nation, the West Los Angeles VA has opened its campus to veterans who sleep in their cars. Officials say it's a less-than-ideal starting point to help homeless vets.

Veterans With No Family Are Remembered

It happens hundreds, if not thousands, of times a year nationwide. A veteran dies, but there’s no family nearby. So, the Department of Veterans Affairs steps up to handle the burial.

Female veterans are nearly 2 1/2 times more likely than their civilian counterparts to kill themselves. Advocates say women's mental health challenges are different from those of men.