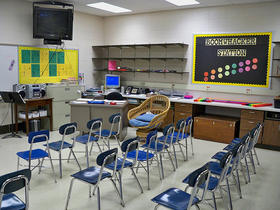 The price tag for Florida’s class size amendment is now at $34 billion. The state has spent that much since the measure was put into the Florida constitution by voters back in 2002. Since that time, its caused headaches for schools and districts which undergo the tricky task of trying to meet the standard. Now  state lawmakers are trying again to grant districts a little more wiggle room when it comes to class sizes.

The legislature tried in 2010 to loosen the state’s class size mandates by asking voters to change the constitution. But the issue failed on the ballot. After that, they decided to go in legislatively—loosening requirements for charter schools alone. This year, Rep. Ralph Massullo, R-Beverly Hills, wants to give that same flexibility to all schools:

“That should save the state a lot of money," he says, "plus, it would provide flexibility for our districts and our teachers, in planning their classes, and students in their education.”

Current class size laws specify only 18 kids can be in each pre-kindergarten through third grade class; 22 kids can be in a 4th through eighth grade classroom, and there is a max of 25 kids per class in high school. It seems a reasonable expectation, but in reality administrators often jump through hoops and hurdles to make the figures work,

“They responded in four basic ways. They paid the fine because it was less than the cost of staffing up at those levels," says Indian River School Board member Shawn Frost. "They performed the herculean task of balancing these issues, and over-hiring.”

Districts have also reclassified schools and classrooms to take advantage of exemptions.

Meanwhile, the state has often tinkered with the law. It’s reduced the type of classrooms that fall under the amendment, and reduced penalties and fines. Studies from organizations like the Brookings Institution have found class sizes have little impact on student performance. A point noted by Frost, who also represents the conservative Florida Coalition of School Board Members.

“The literature doesn’t support that it results in better outcomes. It does make sense on a common sense level, however, you have to think about how districts have responded.”

But Rep. Joseph Abruzzo, D-Boca Raton, worries trying to work around an established constitutional mandate could lead to more problems than fixes. The measure focuses on the implementing legislation to the class size amendment, not the amendment itself. Abruzzo  also worries there’s not enough support for the measure in the Senate.

“Your senate sponsor has four stops and it hasn’t been agenda’d or heard," he told Massullo, " So the chances, although it could happen, are probably not likely this year. And I’m not comfortable voting yes on changing the voters’ intent without more information.”

Still, Rep. Massullo argues now is the time to be bold.

“Within the parameters in the law we need to come up with ideas that work better for our state and provide more flexibility for our schools to unleash and release that power that’s within the school system," he says."

In 2015 the State Board of Education made a pitch for changing class sizes that went nowhere. And in the past, organizations like the state teachers union have viewed efforts to change the law as a way for the legislature to take money away from public schools.

A House budget panel Tuesday approved a proposal that would send $2.462 million to the University of Florida for research about issues such as the effectiveness of medical marijuana in treating patients.

The House Tourism & Gaming Control Subcommittee on Wednesday unanimously approved a measure that would ban injecting racing greyhounds with steroids.

A controversial plan to speed construction of a 60,000-acre reservoir on farmland south of Lake Okeechobee — to reduce the risk of more "guacamole-thick" water appearing in Treasure Coast communities — was expanded Wednesday to include water projects in other parts of the state.

A couple of juvenile justice-related bills are now moving in the Florida House and Senate.