There’s a darker side to a rebounding Florida Panther population with state game officials reporting a spike in attacks on livestock and domestic animals in rural Southwest Florida. 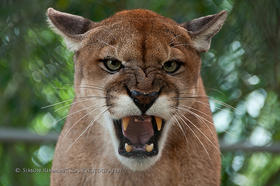 The Florida Fish and Wildlife Conservation Commission says 83 animals have been killed or injured, compared to 77 in 2016.

FWC’s Kipp Frohlich  cautions the numbers vary and could be the result of better reporting.

“Definitely the numbers of depredations of livestock and the numbers of road kill panthers, they both have tracked upwards and both are the result of the increasing panther population in Florida.”

Most of the victims have been goats, but the Naples Daily News says miniature horses, pigs, cats and even an alpaca have been targeted.

The spike comes as the U.S. Fish and Wildlife Service conducts a five-year review of the panther’s “endangered” status.

Florida Panther Fatalities On Pace For Another Record Year

Florida Fish and Wildlife Conservation Commission officials have documented 22 dead panthers so far this year. All but four of the animals died in vehicle collisions. Last year, 41 panthers died.

Darrell Land of FWC says the state’s panther population is estimated at up to 180 animals, compared with a few dozen 30 years ago.

Florida set a new record for the number of panthers killed on roads after a 1-year-old female panther was hit by a car on Tuesday.